SeafarerHelp is the 24 hour multilingual helpline for seafarers run by the International Seafarers Welfare and Assistance Network (ISWAN). 2015 was a busy year for the SeafarerHelp team, with a 17% increase in the number of cases compared to 2014. Cases and seafarers helped have tripled since 2011, as seafarers have become more aware of the support we can provide.

With ten team members speaking over 11 languages, SeafarerHelp assisted nearly 10,000 seafarers of 86 different nationalities in 2015. Seafarers contacted us from 129 countries. The most common problem was unpaid wages while repatriation and contractual problems were also recurring issues, Many of the contacts that SeafarerHelp receives are referred on to specialist organisations for direct assistance. These include the International Transport Workers’ Federation (ITF) and welfare organisations such as Mission to Seafarers, Apostleship of The Sea, and the Sailors Society. Other agencies that assisted included national embassies, harbour authorities, and medical service providers. 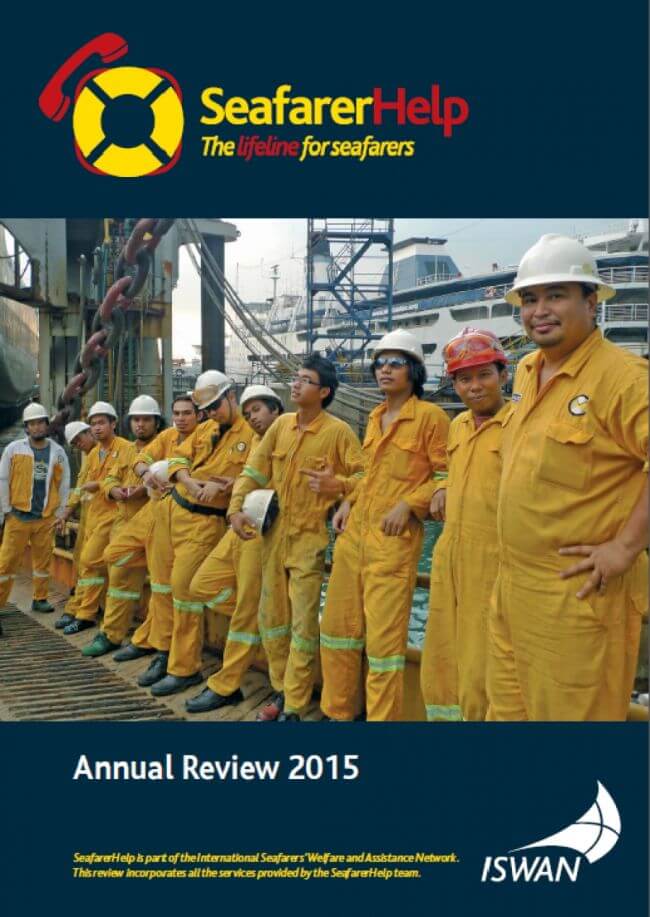 The SeafarerHelp team follow up on all cases, and seafarers are given the opportunity to provide feedback on the service. Seafarers said “don’t stop helping seafarers that need assistance”, “it is important that all seafarers have a charity like ‘SeafarerHelp…” and “It made a lot of difference as it gave huge relief to me and my family.”

Roger Harris, the Executive Director of ISWAN said ”2015 was another busy year for the SeafarerHelp team. We are proud of our dedicated staff who are able to provide round the clock assistance everyday of the year to seafarers no matter where they are in the world.”

The Seafarer Help Annual Review for 2015 is available for download at the bottom of this page, as is an infographic that summarises some of the vital information.

SeafarerHelp is provided by the International Seafarers Welfare and Assistance Network, an international charity the supports the welfare of seafarers worldwide. ISWAN is funded by the ITF Seafarers Trust, The TK Foundation and Seafarers UK.