The Sea Shepherd U.S. flagged sailing vessel MARTIN SHEEN is being detained in Victoria, British Columbia. Canadian Customs has refused to grant clearance despite advanced notice of the arrival of the vessel from Honolulu, Hawaii.

U.S. citizen Captain Chris Holt has been detained and his passport removed from the vessel by customs officers. The other 7 crew are American and Canadian plus one Polish and one French citizen. They have all been cleared. The captain and the vessel have not been cleared.

Sea Shepherd Director of Operations Locky MacLean is appearing at Customs HQ in Victoria in court this morning for a hearing on the manner. 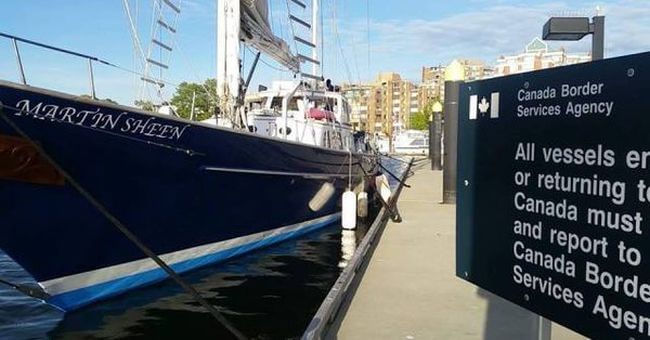 Customs asked if Dr. Alexandra Morton would be coming onboard. They also informed Sea Shepherd that there was no need for any research regarding the salmon farms because the Canadian Department of Fisheries and Oceans already does research.

The MARTIN SHEEN has been in B.C. waters every summer for the last three years and not once has the vessel or crew been in violation of any Canadian laws. The sole motivation for the MARTIN SHEEN being in B.C. waters is to assist Dr. Alexandra Morton and her independent research into the transmission of salmon parasites and viruses. The campaign is Operation Virus Hunter.

It appears that the denial of entry is politically motivated.
Will the Canadian government deny this independent research by Sea Shepherd and Dr. Morton?

Dr. Alexandra Morton is asking if this has anything to do with the fact that she is studying the spread of piscine reovirus to wild salmon from BC farm salmon, as the Canadian Minister of Fisheries is fighting two lawsuits to allow infected fish into BC farms, while in Washington State, transfer of farm fish infected with this virus is prohibited.