While the Ocean Warrior remains in hot pursuit of the factory vessel, the Steve Irwin captain Wyanda Lublink and her crew, can hold their heads high for a job very well done. 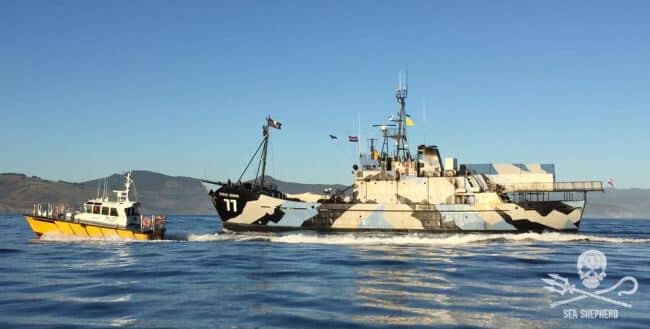 Captain Wyanda Lublink stated, “It’s with mixed emotions that I stand here today, on one hand I am happy to be back on land with the crew, knowing that we gave our absolute all in defending the whales, though its hard leaving Captain Adam Meyerson and the crew of the Ocean Warrior down there still . However we had no choice as we were out of fuel and by the time we fuel up and return, the whaling season would be over.”

Never before has Sea Shepherd faced such a tough task with the Japanese whale poachers expanding their killing fields to twice as big as before, effectively meaning our ships were searching for a handful of trucks in an area twice as big as Australia.

The odds were stacked against our crews this year, but the captains and crews of the Steve Irwin and Ocean Warrior have delivered and continue to do so. The whaling fleet was intercepted early on and we have kept them running and delivering harrowing images of a protected minke whale slain on the flensing decks of the floating slaughterhouse, Japans factory whaling ship, the Nisshin Maru. The world last remaining factory whaling ship, a vessel that belongs back in the dark ages.

After 83 days at sea, the Captain and crew of the Steve Irwin have returned to land triumphant and heroes. Our brave crews have spent many months away from family and friends patrolling some of the roughest seas, yet some of the most incredible ocean wilderness on Earth. They have seen sights and images that words cannot do justice and take with them experiences that no one can take away, a love of the Southern Ocean, a love of Antarctica and with that their resolve to defend it is stronger than ever.

The volunteer crew of the Steve Irwin have worked around the clock with tireless energy and passion, they have backed one another, supported each other and worked as a united team in defence of the whales. New bonds have been established and existing ones strengthened and even an love of the Steve Irwin vessel itself, for being their home and shelter from some of the biggest and roughest seas in the world while taking them to experience nature on a grand scale in defence of the Southern Ocean Whale Sanctuary. 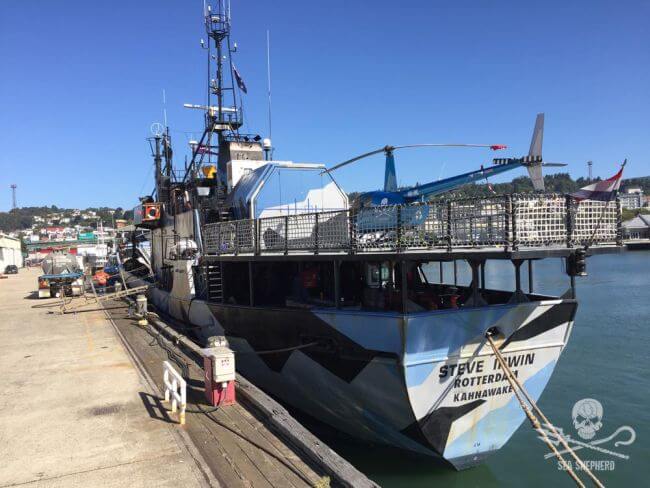 The imagery the crew have captured of the brutal illegal slaughter of protected minke whales in the Australian whale sanctuary have been broadcast to a potential audience of more than a billion people across the planet. The Japanese whalers tried to cover the grisly remains of the whale but nothing can cover the fact that they are continuing to kill whales against international laws.

Thanks to the Steve Irwin’s helicopter and the keen eyes of our chopper pilot, Brent Weyer, we delivered the first images of a protected minke whale killed in the Australian Whale Sanctuary since the International Court of Justice Ruling, that found Japans whaling to be illegal.

Sea Shepherd is on the frontline against whaling alone, no Government, no other organisation is confronting this illegal activity in the Southern Ocean. We are the only ones that stand between the Japanese whale poachers grenade tipped explosive harpoons and these majestic whales.

Director of Sea Shepherd New Zealand, Grant Meikle, said “New Zealand joined Australia in talking Japan to the ICJ, yet it is only Sea Shepherd defending the southern Ocean whale sanctuary and with this being the first time a Sea Shepherd vessel has been open for free public tours in the South Island I encourage everyone to come down and see firsthand what it’s all about”.

From all of us at Sea Shepherd, thank you captain Wyanda Lublink and the crew of the Steve Irwin.

Here is what Sea Shepherd founder, Captain Paul Watson had to say about the Steve Irwin returning from Antarctica.

“The volunteer men and women on the Steve Irwin and the Ocean Warrior have done an absolutely incredible job exposing and opposing illegal Japanese whaling operations in the Southern Ocean this season. They dedicated their time, took time away from their families especially over Christmas, they weathered quite a few storms and hazardous ice conditions and brought the Japanese crimes once again before the eyes of the world.Operation Nemesis has kept the entire Japanese whaling fleet on the move continuously, costing them time, costing them money and keeping two thirds of the fleet of harpoon boats busy and not whaling the entire season.”