“Sea Shepherd is most well-known for defending the whales in their Antarctic feeding grounds, however the place where they are born, their home in the waters of the Great Barrier Reef face an even bigger threat than the Japanese whaling fleet in the form of Adani’s proposed Carmichael coal mine,” Jeff Hansen, Managing Director, Sea Shepherd Australia, said.

“The increase in vessel traffic causing ship strikes, spills and noise pollution will have a catastrophic impact on Australia’s whales. If the Australian government will not oppose whaling by Japan, the very least it can do is protect the whales birthing grounds and put an end to this madness of the Adani coal mine. 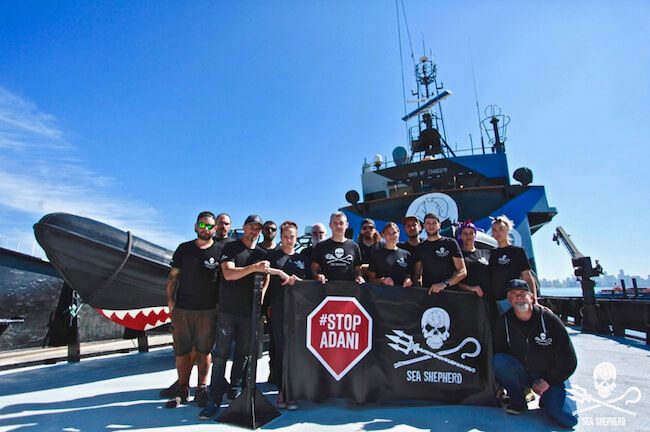 “Recent polls show that the majority of Australians oppose the Adani coal mine and why shouldn’t they with such a corrupt and dishonest operator, who has already polluted our Great Barrier Reef, shows no regard to the health of our planet, and is cosying up to our government for an almost one billion dollar concessional loan of Australian tax payers money. On top of that, the negligible jobs on the table put at risk 64,000 indirect and direct jobs the Great Barrier Reef creates,” Mr Hansen stated.

“Sea Shepherd’s flagship vessel, the Steve Irwin has defended the whales in their Antarctic feeding grounds for over a decade and protected the whales off the Kimberley coast and the Great Australian Bight. Once more the Steve Irwin will defend the whales, this time in the Great Barrier Reef on Operation Reef Defence, in opposition to Adani’s coal mine, with an urgent engine overhaul underway.

“Given most of the air we breathe comes from our oceans, they truly are our life support system. However through the burning of fossil fuels our oceans are warming and becoming more acidic, having a massive impact on our Great Barrier Reef, phytoplankton and the overall health of our ocean ecosystems. Quite simply, our planet’s ability to support life hangs by a thread, and if we want to have a liveable climate in the future for our children, we can simply not allow this Adani coal mine to go ahead. Losing this one is not an option,” Mr Hansen said.Sea Shepherd Australia is part of the Stop Adani Alliance, a campaign that is fast becoming the biggest movement in the country, a growing network of organisations who stand together to stop the Adani Carmichael coal mine, rail and port project: http://www.stopadani.com