The vessel is named after longtime supporter and co-founder of John Paul Mitchell Systems salon products. Ceremonies began the morning of January 31st with a press conference aboard the new ship with speeches by Sea Shepherd Founder and President Captain Paul Watson and DeJoria. It was followed by a classic naval ceremony of breaking a bottle over the bow to invite good luck. 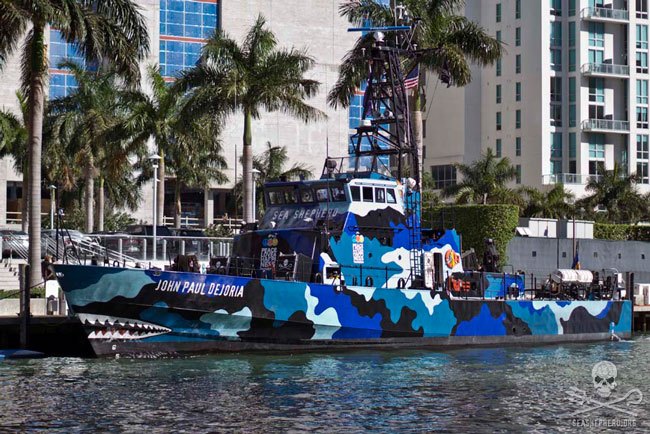 Instead of the traditional champagne, however, a bottle of tequila from the DeJoria-owned Patrón Spirits Co. was used for the time-honored commemoration. When DeJoria broke it against the anchor, the M/V John Paul DeJoria officially became the first ship in history to be christened with a bottle of Patrón tequila.

“We’re proud today to unveil and to launch the John Paul DeJoria,” said Captain Watson of the 110-foot Island-class fast patrol boat. “This will be the 9th vessel in the Sea Shepherd fleet… I can’t think of a person who I am more proud to have a name on a vessel than John Paul DeJoria.”

DeJoria called Watson “one of today’s heroes” and praised Sea Shepherd for helping and protecting the marine world’s “living souls” while asking for “absolutely nothing in return.”

Captain Watson also announced the M/V John Paul DeJoria will begin its journey this year with anti-poaching work off Central and South America to protect sharks and other marine wildlife being illegally exploited around Malpelo Island, Cocos Island and the Galapagos.

While China has long been one of the top importers of shark fins, Captain Watson noted during the press conference that some headway in creating change has already been made. In 2012, China banned shark fin soup from official government banquets and in January of this year, China Air Cargo became the first mainland carrier to ban the transport of shark fins.

“We’re making progress in both stopping poachers and, also on the other end, trying to convince governments that we have to put an end to this,” noted Captain Watson.

DeJoria told the gathered crowd he learned from Captain Watson that if humans don’t stop “fishing out” the oceans, 40 years from now there will be no more fish. DeJoria commended the island of Barbuda, off the coast of Antigua, which instituted a moratorium on fishing within two miles of the island. To help the island, while simultaneously setting an example for others in the business and philanthropic communities, DeJoria sealed a deal on a US $250 million venture that will include a resort on Barbuda to help local fisherman find alternative work, while at the same time, help the environment to replenish the ocean.

“There’s about 30 families (on the island) there that depend on fishing, and they average about $10,000 a year,” DeJoria explained to the crowd standing on the bow of his namesake ship. “We…. are going to (help them with their income) for a full year until a resort is built and they have regular work. This way we find other work for those people.” 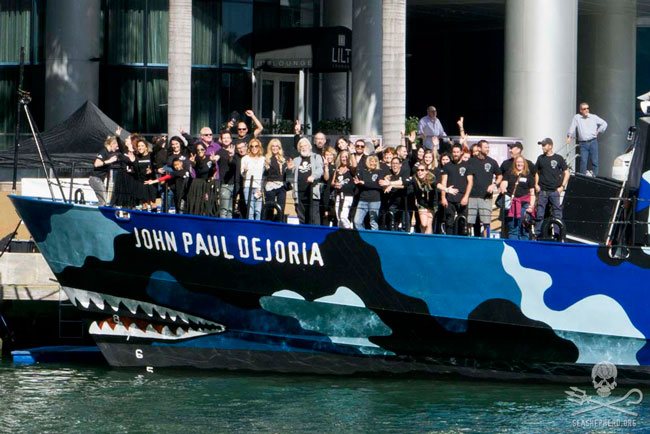 DeJoria and the Namesake Ship

DeJoria, also a guest investor on the ABC reality series Shark Tank, has a long-standing relationship with Sea Shepherd. In 1998 he traveled to the Gulf of St. Lawrence with the conservation society to stand against the Canadian Seal Hunt. His close relationship to Watson led DeJoria to issue a video in support of Captain Watson after the latter was arrested on a warrant issued by Costa Rica in 2012 for interfering with shark finning.

An advisory board member to Sea Shepherd, DeJoria also sponsored the purchase of organization’s M/V Farley Mowat. That ship, currently on an anti-poaching mission in the Sea of Cortez, proudly bears the logo of DeJoria’s JP’s Peace, Love & Happiness Foundation, which supports charities that promote environmental sustainability, social responsibility and the protection of animals.

The M/V John Paul DeJoria is a former U.S. Coast Guard patrol vessel that first joined Sea Shepherd’s fleet in 2015 and was called the M/V Jules Verne, in honor of the French writer who gave the world the inspiring story of Captain Nemo.

The unveiling of the new ship kicked off a four-day event of free public ship tours aboard the M/V John Paul DeJoria. Tours began Tuesday the 31st from 1 p.m. to 5 p.m. and will continue Wednesday, February 1st to Friday, February 4th from 9 a.m. to 5 p.m. daily.

Ship tours will be free and open to the public. In addition to providing tours of the vessel, the crew will share information about Sea Shepherd’s work to defend ocean wildlife and habitats worldwide and their first-hand experiences as crewmembers. Sea Shepherd merchandise will be available for sale and donations of funds, food and supplies from Sea Shepherd’s generous supporters will be accepted. Those who are unable to visit the ship can donate or shop to support at seashepherd.org.