An industry first in wireless vessel control, the two bodies granted their approvals after an exhaustive review of Sea Machines’ technology and the SM200’s applications aboard these tugs, deeming the system satisfactory for shipboard installation and trials.

Sea Machines managed the review process in partnership with its dealer Rio Controls & Hydraulics, of Houston. 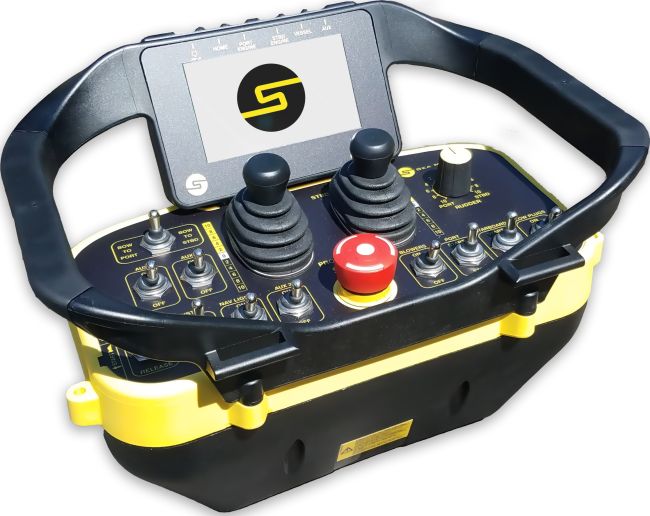 The SM200 introduces flexible control for mariners, meaning the primary operator is no longer bound to a fixed control station. This system enables wireless helm and propulsion control, as well as remote control of auxiliaries and payload equipment, freeing mariners from the wheelhouse to conduct operations from any location that offers the greatest visibility and safety.

One significant advantage of using the SM200 aboard an ATB is for connecting the tug in the barge notch. This Sea Machines system empowers the pilot to be in full control of the tugboat and connecting pins with a direct local view of the task, as compared to conventional methods that often rely on signals relayed from another crew member to the wheelhouse. Along with vessel maneuvering, the SM200 beltpack also enables wireless remote control of vessel equipment, including connection pins, pumps, winches, anchor windlasses and more.

“Today Sea Machines celebrates the confirmation that our SM200 system has been approved for use aboard ATBs by two of the most trusted bodies in the industry, ABS and the U.S. Coast Guard,” said Michael G. Johnson, CEO, Sea Machines. “We also would like to thank Rio Controls & Hydraulics for their hard work in supporting the thorough review process and integrating the SM200 with their systems. This approval will unquestionably be the first of many to come for a wide variety of vessel types and is already fostering greater industry acceptance for this new realm of marine technology that boosts the capability, productivity, and safety of vessel operations.

“Sea Machines and Rio Controls & Hydraulics offer solutions to operators that take full advantage of the evolution of technology to overcome inefficiencies and safety issues that currently exist in the marine industry,” said Shane Faucheux, president, Rio Hydraulics & Controls. “The advanced technology that exists within Rio’s steering and control systems integrated with the wireless, remote and/or the potential autonomy of the Sea Machines product suite not only offers customers the quality, durability and safety advantages of today’s technology, but also the 24/7 service and support of over 100+ technicians across eight locations within the Rio group. These approvals, once again, have Sea Machines and Rio Controls & Hydraulics leading the industry as innovators and solution providers to the marine industry.”

Sea Machines’ SM Series of products, which includes both the SM200 and SM300, provides marine operators a new era of remote, task-driven, computer-guided vessel control, bringing advanced autonomy within reach for small- and large-scale operations. SM products are ideally suited for existing or new-build commercial vessels, including fireboats, commercial survey workboats, spill-response vessels, security/patrol/search-and-rescue craft, offshore wind support vessels, aquaculture workboats and others. Sea Machines is also a leading developer of advanced perception and navigation assistance technology for a range of vessel types, including container ships. The company is currently testing its perception and situational awareness technology aboard one of A.P. Moller-Maersk’s new-build ice-class container ships and has several other installations scheduled.