Surfers aren’t the only people trying to catch big waves. Scientists at the Department of Energy’s Lawrence Berkeley National Laboratory (Berkeley Lab) are trying to do so, too, at least in wave climate forecasts.

Using decades of global climate data generated at a spatial resolution of about 25 kilometers squared, researchers were able to capture the formation of tropical cyclones, also referred to as hurricanes and typhoons, and the extreme waves that they generate. Those same models, when run at resolutions of about 100 kilometers, missed the tropical cyclones and the big waves up to 30 meters high. 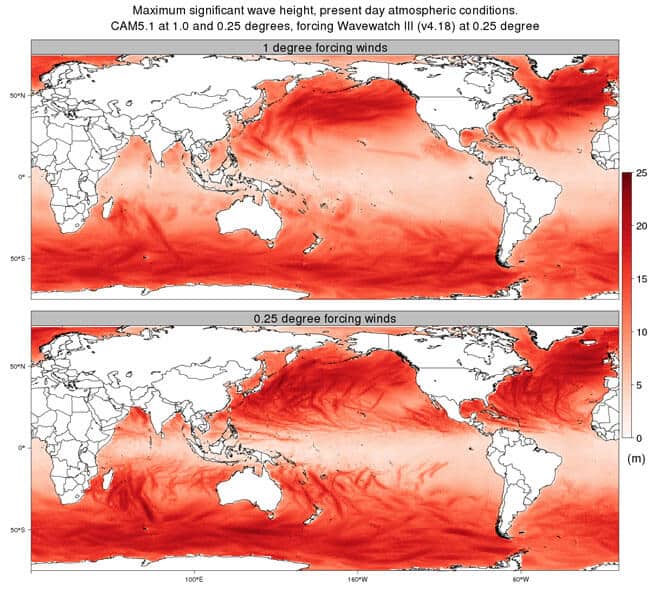 Their findings, published this month in Geophysical Research Letters, demonstrate the importance of running climate models at higher resolution. Better predictions of how often extreme waves will hit are important for coastal cities, the military, and industries that rely upon shipping and offshore oil platforms. And, of course, for surfers.

“It’s well known that to study tropical cyclones using simulations, the models need to be run at high resolution,” said study lead author and postdoctoral fellow Ben Timmermans. “The majority of existing models used to study the global climate are run at resolutions that are insufficient to predict tropical cyclones. The simulations in our study are the first long-duration global data sets to use a resolution of 25 kilometers. It’s also the first time a study has specifically examined the impact of resolution increase for ocean waves at a global climatological scale.”

The other authors on this study are Dáithί Stone, Michael Wehner, and Harinarayan Krishnan. All authors are scientists in Berkeley Lab’s Computational Research Division (CRD).

Zooming in to detect hurricanes

Climate models work by simulating the exchange of air, water, and energy between the grid “boxes.” In today’s state-of-the-art climate models, these boxes are typically 100 to 200 kilometers wide. That level of detail is good enough to catch the formation and movement of midlatitude storms, the researchers said, because such systems tend to be quite large.

The study relied upon the data-crunching power of the National Energy Research Scientific Computing Center (NERSC), a scientific computing user facility funded by the DOE Office of Science and based at Berkeley Lab.

The researchers ran the Community Atmosphere Model version 5 (CAM5) climate model with data collected in three-hour increments at a low resolution of 100 kilometers and at a high resolution of 25 kilometers. They found that the high-resolution simulations included tropical cyclones where the low-resolution ones did not.

To see if the cyclones had an effect on waves, they then ran global wave models at both resolutions. They saw extreme waves in the high-resolution model that did not appear in the low-resolution ones.

“Hurricanes are tricky things to model,” said Stone. “We’ve shown the importance of using a high-resolution data set for producing hurricanes. But the characteristics of hurricanes could change with the climate. People are making projections of changes in ocean waves in a future, warmer world. It’s not clear if the 25-kilometer resolution is sufficient for capturing all of the processes involved in the development of a hurricane. But we do know that it’s better than 100 kilometers.”

While additional high-resolution simulations of the future are on the way, the researchers were able to take a first look at possible conditions at the end of the 21st century. Wehner noted that the biggest waves in Hawaii are projected to be substantially larger in a much warmer future world.

The researchers added that this study only looked at averages of wind-generated waves. One-off “rogue” or “freak” waves cannot be reproduced in these kinds of models, and large waves such as tsunamis are very different since they are caused by seismological activity, not the wind.

The data from this study will be made freely available for use by the wider scientific community.

“In the same way that weather patterns are part of the climate, ocean wave patterns are also part of the ‘wave’ climate,” said Timmermans. “Ocean waves are relevant to the interaction between the ocean and the atmosphere, which affects the planet’s climate as a whole.”

This work was supported by DOE’s Office of Science.

BIO-UV Group’s BWTS Technology Adapted To Kill Coronavirus On Surfaces
Want to share your tips and advice? Got questions? Visit the community forum to ask questions, get answers, meet people, and share your tips!