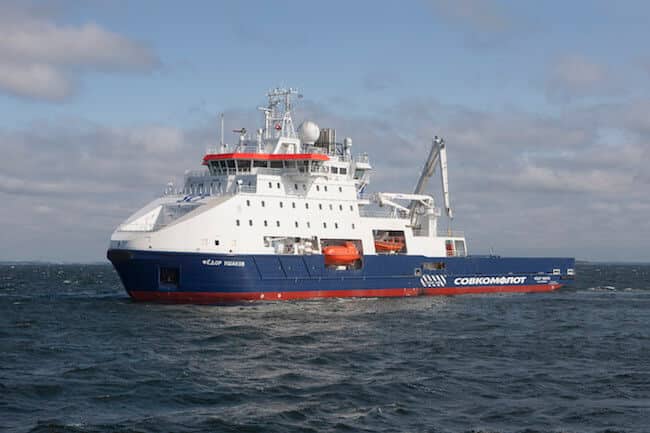 The ceremony was also attended by representatives of the Admiral Ushakov Maritime State University (AUMSU). The vessel’s godmother is Tatyana Timchenko, Ph.D. in Economics, Vice-Rector of AUMSU, Associate Professor at the Organisation of Transportation and Transport Management Department, Head of the Customs Law Department. Also present at the ceremony was Viktor Pushkarev, a fourth-year Mechanical Engineering student at AUMSU.

Fedor Ushakov is the third in a series of four multifunctional icebreaking supply and standby vessels commissioned by SCF Group, under a long-term agreement with Sakhalin Energy – the Sakhalin-2 project operator. Two of these vessels have already been delivered: Gennadiy Nevelskoy, in the spring of 2017, and Stepan Makarov, in the summer of 2017.

The vessels of this series are among the best in their class and are purpose-designed for operating in the challenging ice conditions of the Sea of Okhotsk.

The vessels’ design and equipment allows them to ensure the safety of Sakhalin-2’s personnel, employed at three offshore production platforms, and provide a rapid response to emergency situations throughout the year.

Fedor Ushakov has Saint Petersburg as her home port and is registered under the Russian flag. The all-Russian crew numbers 28.

Principal parameters of the new IBSBV are as follows:

The construction of the four vessels was contracted to United Shipbuilding Corporation, with the actual construction being carried out by its subsidiary, Arctech Helsinki Shipyard.

The Russian Maritime Register of Shipping (RS) is providing technical supervision during the construction of all four commissioned vessels.

The vessel is named after Admiral Fedor Ushakov (1745–1817), a legendary Russian naval commander, who did not suffer a single defeat throughout his entire career and was instrumental in the founding of the Port of Sevastopol and the development of Russia’s Black Sea fleet. In 2004, Ushakov was canonized by the Russian Orthodox Church.