You are here: Home › Shipping News › ‘Santa Of The Sea’ Rev Bill McCrea Honoured For 50 Years Of Service
TwitterFacebookLinkedInPinterestBuffer

The Rev Bill McCrea has played Santa to seafarers for decades – but this year the charity he volunteers with wants to give him something back.

Sailors’ Society, a global maritime charity based in Woolston, has announced it will be holding a special celebration on January 13 to mark the chaplain’s 50 years of service.

Bill still visits seafarers every week in Southampton port despite formally retiring as a Sailors’ Society chaplain 14 years ago. 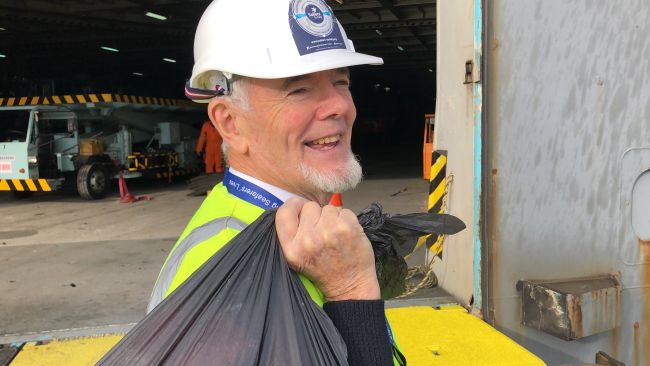 Many of these seafarers will be working far away from their families at Christmas, so Bill and the rest of the Southampton and Fawley chaplaincy team have given out more than 1,400 Christmas presents this year, including woolly hats, puzzles and sweets, to show them they are appreciated.

Sandra Welch, COO of Sailors’ Society, said: “Bill’s one in a million. His selflessness and dedication to supporting seafarers is inspirational and we are so pleased he’s still volunteering for us after all these years.

“We’ve nicknamed Bill ‘Santa of the sea’ because he even takes presents to seafarers docked in Southampton on Christmas day! His family know Christmas dinner will not be served in their home until he has returned from the port.”

Before his retirement, Bill served as a chaplain for 37 years in London, Kent, Belfast, Jamaica, Rotterdam, Antwerp, Houston and Southampton.

He’s reached out to more than 500,000 seafarers over the years, offering a warm welcome, a tune on his harmonica and practical support – from a listening ear to a lift to the seafarer centre or visiting them in hospital when they are ill.

“I love the work,” he said. “I believe you have to have a calling to it and, as I say every week when I go on the ships with my volunteers, every ship visit is different – no two are the same.

“Sometimes the crew have grown up in the job and will remember you years later. Just recently, I met a captain on one of my visits who recognised me from his days as a cadet.”

Over the years he has experienced great joy, like when he gives seafarers free Wi-Fi to contact their families back home, but also tremendous tragedy.

Bill was chaplain to the Merchant Navy Colleges in Greenhithe and Gravesend, Kent, on 6 March 1987, when the roll-on-roll-off ferry Herald of Free Enterprise capsized moments after leaving Zeebrugge port in Belgium, bound for Dover.

Bill took the funerals of four crew members and cared for their families in the aftermath of the disaster.

“I tremble every time I think of some of those situations,” Bill said.

“It was a terrible time for Dover and I don’t think the city has ever fully recovered.”

Despite the hard times, Bill’s commitment to the maritime industry hasn’t wavered and it saw him awarded the Queen’s Golden Jubilee Medal for his services as Chaplain to the Sea Cadets in 2003. He was also awarded the Merchant Navy Medal in 2010 for his services to retired seafarers.