The premier Turkish specialist tug builder, Sanmar, has made two important deliveries of Robert Allan Ltd. designed ASD tugs to different parts of the world during this past week. Each new vessel is the first of a matching pair

The fifth example of this relatively new class has arrived in Naples, Italy, to enter service with Rimochitori Napolitani. A sister tug is scheduled to follow shortly. 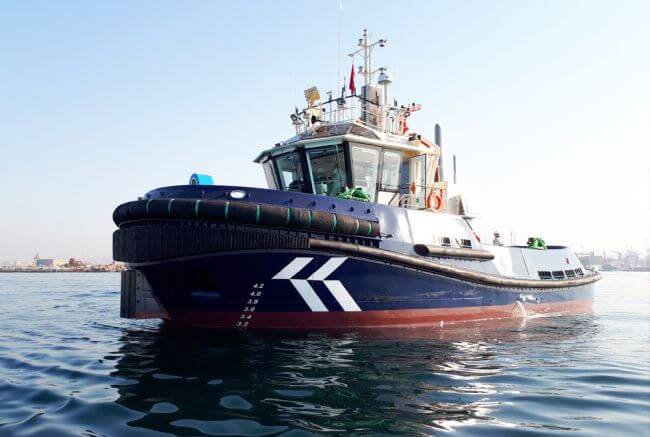 The Sirapinar Series has been designed exclusively by Robert Allan Limited for Sanmar and is based on the phenomenal success of the slightly larger Bogacay Series, a RAmparts 2400 SX (Sanmar exclusive) type. The hull of the new 22m tugs, also a Sanmar exclusive, available in 45 to 60 tonne bollard pull versions, is similar to the larger model and can run astern at high speeds, whilst maintaining good control and directional stability in all directions.

Sanmar has built nearly 40 vessels of the larger model with bollard pulls ranging from 60 to 75 tonnes depending on installed horsepower. Marechiaro has a bollard pull of 50 tonnes – in the middle of the 45 to 60 tonnes bollard pull range planned for this model.

Measuring 22.40m overall with a beam of 10.85m and maximum draft of 4.67m the two boats for Italy are being built to RINA class and Italian flag requirements and are powered by pairs of 1500kW Caterpillar engines.These turn Schottel azimuthing Rudderpropellers to give a trials performance of 50.2 tonnes bollard pull ahead and a free-running speed of 12.6 knots. Another similar vessel is currently being fitted out prior to delivery to Spain. 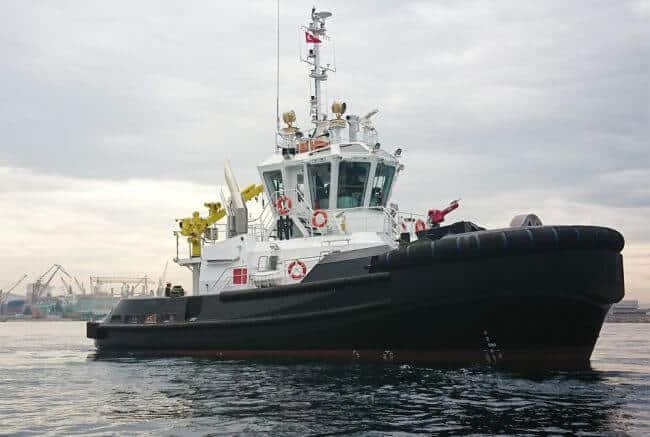 Two factors influenced the decision. Not only has SAFEEN already been operating a Yenicay Class vessel which has proved highly successful over the past year but prompt delivery was key – quick availability of a design that had already been proven in the local conditions was a ‘no-brainer’.

Yenicay VI and Yenicay VII are ASD configuration with dimensions measuring 18.7m x 9.2m and utilise Caterpillar C32 main engines each developing 969kW at 1,800 rev/min. These drive Veth VZ-900 azimuthing stern thrusters. This arrangement gives a bollard pull of 33.71 tonnes and a speed ahead of around 12 knots.

The Yenicay class of compact tugs have been specifically designed to provide high performance line and ship handing capabilities typical in smaller ports and harbours. In addition, provided with upgraded seawater cooling and HVAC these vessels will ensure reliability and crew comfort during the extremely high ambient air and seawater conditions faced in the Middle East.

Sanmar is both an operator and a quality tug builder. It has two custom built modern covered shipyards and has an international reputation adding 40 years of operational experience to the acclaimed design skills of Robert Allan.Ltd. The Sanmar portfolio is the largest avilable with many exclusive models and the reference list now contains over 180 tugs.

What are Tug Boats – Types And Uses

The US Navy’s New Tugs To Be Designed By Robert Allan Ltd.