The government of the Saharawi Arab Democratic Republic (the SADR) and the Frente POLISARIO, announced today the detention of a second vessel carrying a cargo of phosphate rock illegally mined and sold from occupied Western Sahara. The motor vessel Ultra Innovation was detained last night in Panama under court order while transiting the Panama Canal en route to Canada.

The motor vessel is carrying phosphate rock, estimated at 55,000 tonnes and valued around $6 million USD is considered to be bound for Agrium Inc. through the Port of Vancouver, consistent with a pattern of shipments for the company and a chartering of vessels managed by the Danish firm Ultrabulk A/S. 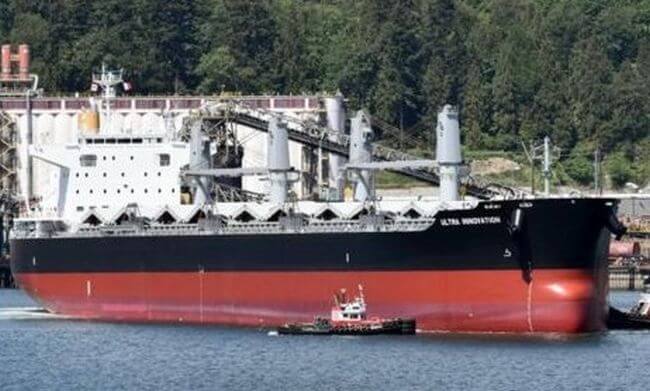 The m.v. Ultra Innovation,part of a fleet of bulk carriers constructed with financial assistance from Canada’s Canpotex potash export consortium, of which Agrium is a part owner, had been tracked prior to its arrival late last month at El Aauin on the coast of Western Sahara. Ultrabulk ships have featured in about one-third of shipments to Agrium since the company announced in September 2011 that it would begin imports from “Morocco”.

Mr Emhamed Khadad, member of the Frente Polisario, leadership and the senior SADR official responsible for natural resources, remarked that: “We are optimistic this second recourse to applying the law to bring an end to the blatant, theft of a resource belonging to a people under occupation will demonstrate our resolve.

The May 1 interdiction of a cargo passing through South Africa and today’s step in Panama, are part of ongoing measures to seek justice against in the illegal exploitation of the natural resources of Western Sahara and enhance the rule of law in the advancement of self-determination for the Saharawi people.”

From the outset of shipments for the company into the Port of Vancouver in the second half of 2013, the SADR government has attempted to engage Agrium, routinely protesting individual shipments and in 2016 rejecting an inadequate human rights evaluation done on request of the company as failing to explain the essentials facts of occupation and serious human rights abuses in that part of Western Sahara held by Morocco.

“A basic starting point to thinking about Western Sahara”, remarked Khadad, “is the conclusion of the International Court of Justice in 1975 that Morocco does not have ‘any’ territorial right or claim to Western Sahara. Then add to this the pronouncement of the UN General Assembly that the territory is occupied. There’s nothing complex about territorial annexation and a selling of what is stolen property – in the face of our repeated constant protests – out the front door of our house. After years of calling for an end to this trade and seeking creation of United Nations oversight of our resources until its commitment to provide a referendum of self-determination of the Saharawi people is fulfilled, it was time to resort to the rule of law in the international order.”

The detention of the two vessels, that in South Africa on May 1 and was bound for the New Zealand importer Ballance Agri-Nutrients Limited (54,000 tonnes; $7 million NZD), follows a case brought for the Saharawi people in the Court of Justice of the European Union. The case, with an appeal issued by the full court, concluded that Morocco had no territorial rights or claim in Western Sahara, and that a European Union free trade agreement could not extend to operate in the territory.

The court particularly noted that the consent of the Saharawi people was needed for the trade or otherwise agreements concerning such things as natural resources.

Khadad explained that: “The Saharawi people wanted their government to act. We could no longer tolerate the myth that the mining and export of phosphate rock was somehow a benefit to that part of our people under occupation inside Western Sahara. And our people in the refugee camps haven’t seen anything from the trade. Consider this: A high quality phosphate rock for agricultural fertilizer is sold at a profit and benefits the nutrition of children in countries such as Canada and New Zealand. Meanwhile, the rightful owners of the resource, including Saharawi children, face poor food security in refugee camps. The injustice of this situation could not be more apparent.”

It is expected following such legal steps that Saharawi government authorities would take legal action against all the conspirators in the illegal trade of resources of Western Sahara and would pursue individual ship owners for future cargos, including later civil claims against them in specific countries where port calls are made.

The detention of the cargo aboard the Ultra Innovation comes one day before the South Africa High Court is scheduled to consider its May 1 direction for interdiction of the New Zealand bound cargo.

Mitsui And BW Group To Jointly Own FSRU “BW Integrity”

Investigation Unveils Reasons Behind Loss Of Containers From YM Efficiency
DNV Awards AiP To DSME For Rotor Sail System
Want to share your tips and advice? Got questions? Visit the community forum to ask questions, get answers, meet people, and share your tips!