The 16 MW Icebreaker for the Russian Ministry of Transport was launched at Arctech Helsinki Shipyard on March 25th, 2015. Before floating the vessel, she was given the name ceremonially by breaking of a champagne bottle on the bow of the vessel. The ship was named by the Godmother of the vessel Marina Vasilyevna Kovtun, the Governor of the Murmansk Region, who wished the best of luck for the Murmansk icebreaker.

The vessel being built at Arctech belongs to the series of three new buildings ordered by the Russian Ministry of Transport from Vyborg Shipyard. The basic design and purchasing of major components will be provided by Vyborg Shipyard as well as 40% of the vessels hull blocks. Arctech will be responsible for the construction, outfitting and commissioning of the vessel. 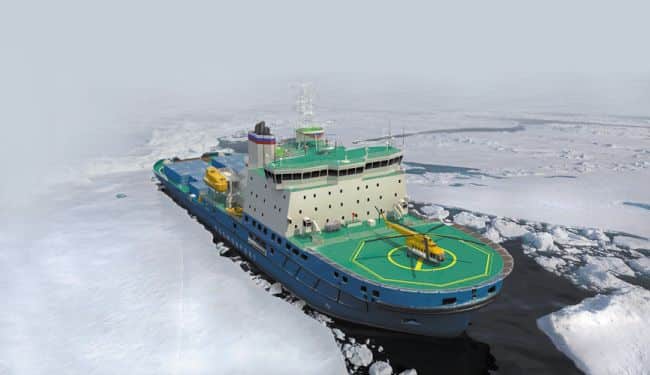 ”Icebreaker Murmansk, which was launched today, is of an icebreaker type in the Russian icebreaker renewal program intended both for the Baltic Sea as well as Arctic conditions. The vessel will be delivered later this year. The vessel is built in co-operation with Vyborg shipyard”, comments the Managing Director of Arctech Helsinki Shipyard, Esko Mustamäki.

The main tasks of the Arctech new building no. 509 vessel are icebreaking and assisting of heavy-tonnage vessels in ice, towing of vessels and other floating structures both in ice and in open water. The vessel is able to operate in temperatures as cold as -40°С and the maximum icebreaking capability is 1.5 m. The vessel will also be used for fire fighting on floating objects and other facilities, assisting vessels in distress in ice and open water and cargo transportation. The vessel will measure 119.8 m in length and 27.5 m in breadth. The four main diesel generator sets have the total power of 27 MW. The total propulsion power is 17.4 MW consisting of two full-circle azimuth thrusters.

At the moment Arctech is building six icebreaking vessels. The first vessel, the Murmansk icebreaker for the Russian Ministry of Transport, is due to be delivered in the autumn of 2015. The second vessel, the world´s first LNG-powered icebreaker for the Finnish Transport Agency, will be delivered by beginning of 2016. In the spring of 2014 Arctech was awarded a contract to build an icebreaking supply vessel for the Russia´s largest shipping company Sovcomflot. In early summer 2014, Arctech received an additional order of three icebreaking stand-by vessels. Arctech´s order book now extends until summer 2017.