Atomflot, the nuclear icebreaker port of Murmansk recently signed a contract for the construction of Leader, a huge icebreaker on which rests Moscow’s hopes of keeping the shipping routes of the Arctic region open throughout the year.

Speaking of engineering myths, the construction of Leader had always been considered something like that. The ship structure is way bigger and streamlined than other ice-breakers operated by Russia which are generally boxy. Reports state that the ship has the capability to break the ice which has a thickness of up to 4m, with a navigational speed of 10 knots, resulting in a stretch of 50m which is cleared of the ice. 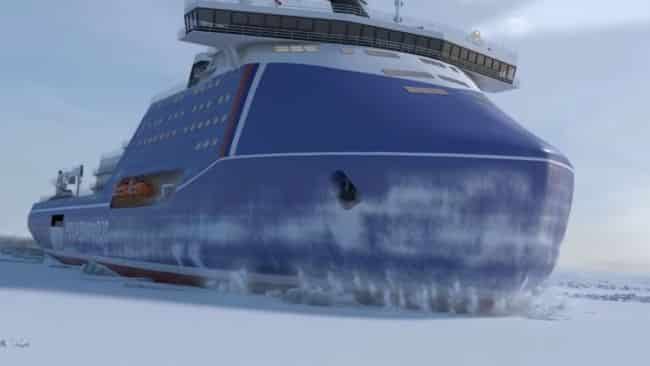 It is not unknown that Russia has been following a rigorous expansion policy when it comes to the Arctic region with hopes to open the Northern Sea Route connecting Europe to Asia with the hopes that it could give a tough fight to the Suez Canal.

Russian state officials could be heard saying that the ship would be used to clear the sea for tankers from Asia in Eastern Russia.

The Leader is said to be of 200 meters or more, largely overshadowing the former Russian shipbreakers when it comes to that. Apart from that, there are rumours that the hull design would increase the agility of the ship in comparison to others of the Russian fleet.

Three other nuclear ice breakers are under construction at a Baltic shipyard. Together with these 3 ships, Russia has pinned down it’s economic glory of keeping the Northern Sea Route open all year round.