The crew of Type 45 destroyer HMS Dragon have rescued 14 sailors in treacherous weather conditions today after a racing yacht suffered damage in the Atlantic ocean.

HMS Dragon was diverted 500 miles away from a routine tasking to provide life-saving assistance to the crew of the 60ft Clyde Challenger racing yacht. The yacht had left the Azores on 5 February 2017 and was bound for the UK when it suffered significant damage following days of strong winds and heavy seas.

Working with UK and US aircraft as well as merchant shipping vessels, the Portsmouth-based HMS Dragon was tasked to locate and rescue those on the stricken yacht. 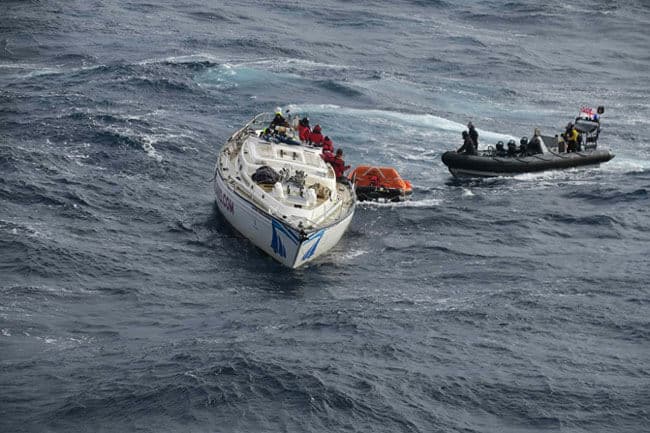 When we arrived on scene it was clear the yacht had lost its mast and looked in a pretty desperate state after nearly 48 hours drifting in the challenging conditions.

Sprinting at 30 knots through the turbulent seas, the Type 45 destroyer eventually reached the yacht at 1430 this afternoon to render assistance. 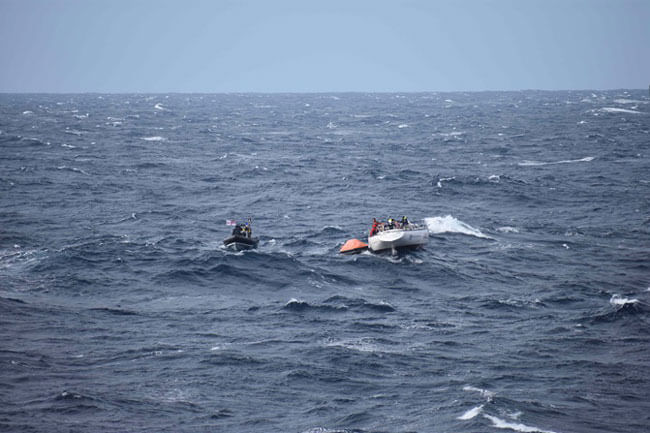 “When we arrived on scene it was clear the yacht had lost its mast and looked in a pretty desperate state after nearly 48 hours drifting in the challenging conditions,” said Petty Officer Max Grosse, the Chief Bosun’s Mate on board HMS Dragon.

“We were however hugely relieved to see all 14 crew alive and well. Despite racing through the night we only had three hours of daylight remaining in which to safely remove the crew. Luckily HMS Dragon is fitted with two large sea boats capable of carrying six passengers each. 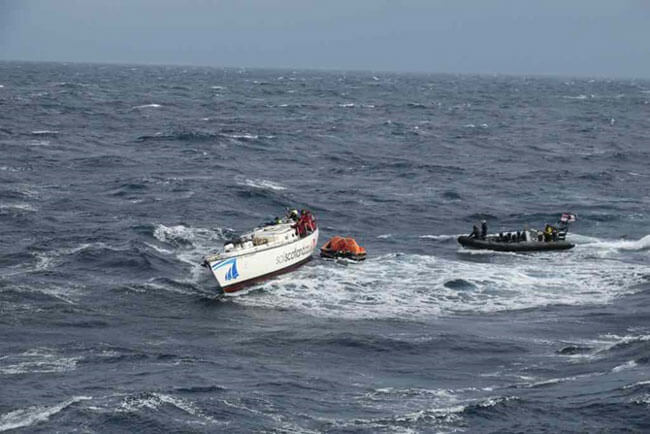 “We were able to use both boats to transfer the crew as quickly as possible. The prevailing weather conditions and notorious Atlantic swell made it enormously challenging though and really tested the skills of my experienced sea boat coxswains.”

Those on board had fortunately suffered only minor injuries during the ordeal, but the yacht’s Master determined the Clyde Challenger could not be safely recovered to the mainland. The effort therefore shifted to extracting the 14 members of crew to the safety of the 8,500-tonne warship. 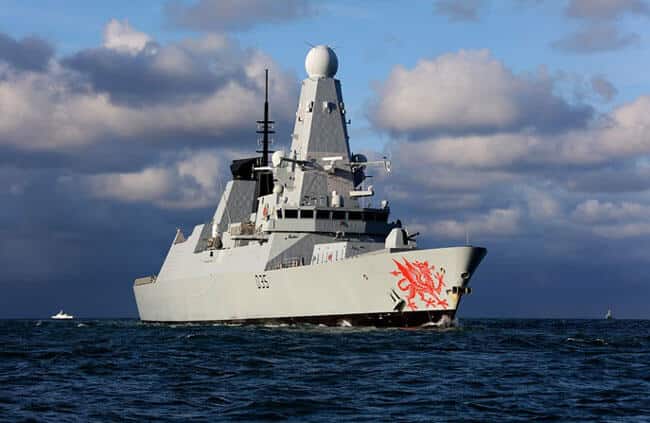 Once safely on board HMS Dragon the relieved crew were afforded medical attention, hot food and the opportunity to call loved ones at home.

“HMS Dragon’s ability to quickly respond to this sort of tasking in support of a multinational rescue effort shows the flexibility the Royal Navy’s ships and highly-trained people can bring to bear,” said Captain Craig Wood, HMS Dragon’s Commanding Officer.

“I am delighted HMS Dragon was able to provide vital assistance on this occasion and am rightly proud of the efforts of my sailors in rising to this challenge.”

The Royal Navy’s six Type 45 destroyers are world-leading, highly equipped air-defence destroyers. Manned by a ship’s company of 190 and capable of speeds in excess of 30 knots they have been deployed on operations across the globe since 2010.

572 Survivors Need To Disembark In A Place Of Safety Without Further Delay: Ocean Viking