Royal Navy divers have destroyed a test torpedo which had been speared by the anchor of a merchant vessel – that was also carrying fuel – in Portland. The historic ordnance had been pierced by the fluke of the anchor as it landed on the seabed, and had then been dragged up from around a 15-metre depth. Portsmouth-based Southern Diving Unit 2 were dispatched to the scene where they immediately evacuated the majority of the crew. However six, including the Master, stayed on board in readiness to fight any fires that could have broken out as a result.

“The tanker was carrying approximately 1000 tonnes of fuel or oil,” said Officer in Charge of the Portsmouth-based Southern Diving Unit Lieutenant Commander Jonathan Campbell. “The fuel cargo was pumped into the aftermost possible tanks to reduce the effects of any explosion, and fire hoses were charged and ready to deploy if needed. “We directed the ship to use her other anchor to steady her, before lowering the fouled anchor, and the torpedo, to several metres below the waterline.” 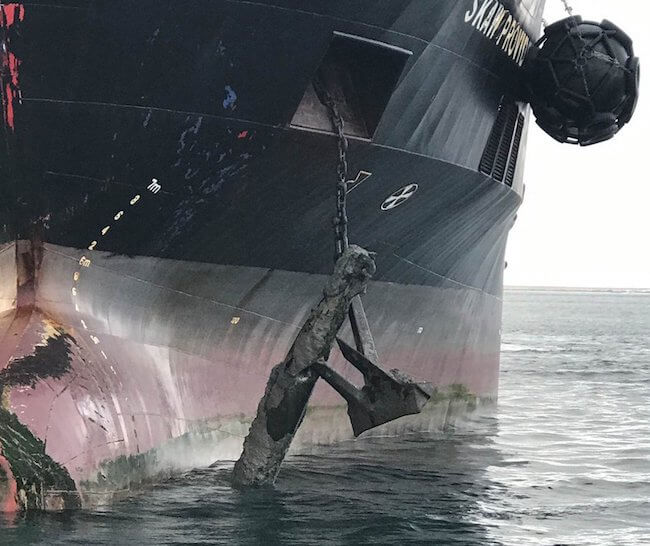 We directed the ship to use her other anchor to steady her, before lowering the fouled anchor, and the torpedo, to several metres below the waterline.
Lieutenant Commander Jonathan Campbell

The Royal Navy divers – who are Explosive Ordnance Device Specialists – had to then approach the torpedo and use their expertise to remove it in a safe manner.

“EOD Operators are obliged to treat these items as ‘live’ and hazardous until it can be disproved otherwise,” said Lt Cdr Campbell. “The entire job was conducted in this way.

“Working parts inside the torpedo could be seen from where the anchor fluke had ruptured it. The entire bomb disposal team were professional and got on with the job in hand.”

Once the torpedo was released the team then took it to a safe area, lowered it to the seabed and destroyed it. The task took around seven hours from start to finish – and the ship were released at around 5pm the same day. “They were thoroughly relieved to be separated from their unwelcome burden,” added Lieutenant Commander Campbell.

The torpedo was a British made device but was in an extremely corroded state. It is believed to have come from a test range that existed for Portland until the 1980s, and had so far remained undetected. While they vary in the type of hazard they represent test torpedo can contain highly flammable propellant.