The keel for Royal Caribbean Internationals’ fourth Oasis class ship was officially laid today at the STX shipyard in St. Nazaire, France. This marks an important milestone in the development of the ship, signifying the beginning of its physical construction. During the ceremony, a 1,000-ton block measuring 32-ft by 154-ft (10 x 47 meters) was lifted by crane into the building dock.

Newly minted coins were placed under the keel and will stay in place there until the end of the ship’s construction. Once the ship is near to completion, the coins are retrieved and presented to the ship’s Captain and crew to be placed onboard the ship. According to maritime tradition, the coins are said to bring luck to the ship during its construction process and then to its Captain and crew when she is sailing out at sea. Still to be named, the fourth Oasis-class ship will be delivered in spring 2018. 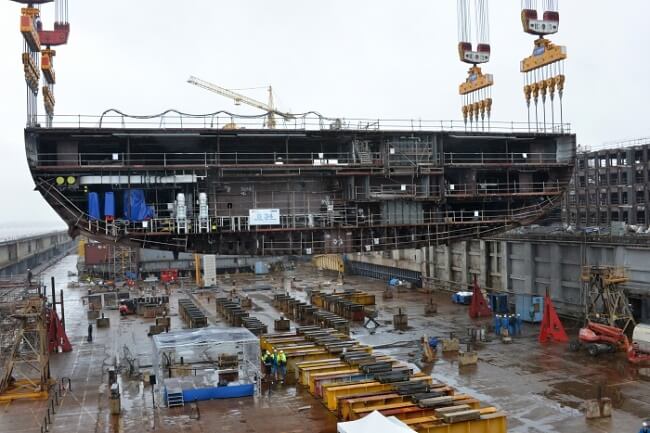 Royal Caribbean International is an award-winning global cruise brand with a 46-year legacy of innovation and introducing industry “firsts” never before seen at sea. The cruise line features an expansive and unmatched array of features and amenities only found on Royal Caribbean including, jaw-dropping, Broadway-style entertainment and industry-acclaimed programming that appeals to families and adventurous vacationers alike. Onboard, guests are catered to with the cruise line’s world-renowned friendly and engaging Gold Anchor Service by every staff and crew member. Royal Caribbean has been voted “Best Cruise Line Overall” for 12 consecutive years in the Travel Weekly Readers Choice Awards.

The cruise line sails 23 of the world’s most innovative cruise ships to the most popular destinations in Bermuda and the Caribbean, Europe, Canada and New England, Alaska, South America, Asia, and Australia and New Zealand. Media can stay up-to-date by following @RoyalCaribPR on Twitter, and visiting RoyalCaribbeanPressCenter.com.