You are here: Home › Shipping News › Royal Caribbean Announces Godmother for Ovation of the Seas
TwitterFacebookLinkedInPinterestBuffer

Royal Caribbean International announced that internationally-acclaimed Chinese actress, Fan Bingbing, will be the Godmother for Ovation of the Seas, the world’s newest and most technologically advanced cruise ship. The announcement was made by Dr. Zinan Liu, President, Royal Caribbean International – China and North Asia Pacific, at a press conference at the Great Hall of People in Beijing. Bingbing is the first Chinese celebrity selected to be the Godmother of an international cruise line and will officially name Ovation of the Seas at the ship’s inaugural ceremony in Tianjin, China on June 24, 2016.

The second Quantum-class ship to be deployed in China, Ovation of the Seas, will sail its inaugural season from Tianjin after a one month mini season from Hong Kong before the ship repositions to its winter homeport in Australia in December 2016.

“We are delighted to welcome Fan Bingbing to the Royal Caribbean family as Ovation of the Seas’ godmother,” said Michael Bayley, President and CEO, Royal Caribbean International. “Bingbing is number one on the Forbes China ‘Celebrity 100’ list and has held that top position for three years making her one of the most influential Chinese stars and in the world. She has received awards from many international film festivals and is recognized as a fashion icon for her extraordinary style on the red carpet, at movie premieres and iconic fashion events. She is innovative, smart, ambitious, trendy and elegant, and that makes Bingbing the perfect person to be selected as the Godmother of our newest ship.” 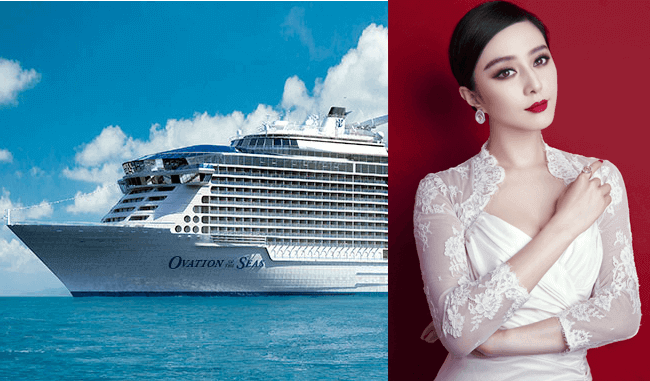 “My father was a singer in the art troupe of the Political Department of the Navy in China. My childhood was filled with the melodies of the sea and I often dreamed about sailing out to sea for an adventure,” said Fan Bingbing at the press conference. “Now, thanks to this invitation from Royal Caribbean, my dreams will come true. I am really honored to be the first Godmother of Chinese nationality for such a prestigious international cruise line as Royal Caribbean International. And I like the name of Ovation of the Seas which in Chinese is interpreted as ‘praising the world and welcoming guests from everywhere’. As Godmother of Ovation of the Seas, I would like to invite more international guests to cruise from China on Ovation of the Seas.”

The role of Godmother is a lifetime title bestowed upon an individual, who figuratively presides over the ship and imparts good luck and divine protection over the vessel and all that sail aboard. Traditionally, Godmothers have celebrity status or even royal connections. Godmothers for Royal Caribbean ships have included, performer Gloria Estefan, actress Jane Seymour, comedian/actress Whoopi Goldberg and tennis champion Steffi Graf, to name a few.

Ovation of the Seas and her sister ship, Quantum of the Seas are both Quantum class ships built with the most advanced technologies. The Quantum-class features unprecedented first-at-sea features and amenities, including the North Star, an observation capsule that gently rises more than 300 feet in the air to treat guests to breath-taking panoramic views; thrilling skydiving and surfing experiences; Two70, a daily social space which transforms into a multifunctional entertainment place at night; SeaPlex, the largest indoor activity space at sea, that features basketball, roller skating, bumper cars and other entertainment. There are 18 restaurants onboard with a variety of cuisines to choose from. The unique loft suites offer the most luxurious accommodations at sea, and Virtual Balcony staterooms are interior accommodations with large digital screens displaying real-time views which ensure that every room has a view.

Royal Caribbean International is an award-winning global cruise brand with a 46-year legacy of innovation and introducing industry “firsts” never before seen at sea. The cruise line features an expansive and unmatched array of features and amenities only found on Royal Caribbean including, jaw-dropping, Broadway-style entertainment and industry-acclaimed programming that appeals to families and adventurous vacationers alike. Onboard, guests are catered to with the cruise line’s world-renowned friendly and engaging Gold Anchor Service by every staff and crew member. Royal Caribbean has been voted “Best Cruise Line Overall” for 13 consecutive years in the Travel Weekly Readers Choice Awards.

The cruise line sails 24 of the world’s most innovative cruise ships to the most popular destinations in Bermuda and the Caribbean, Europe, Canada and New England, Alaska, South America, Asia, and Australia and New Zealand.