You are here: Home › Shipping News › The Royal Canadian Navy’s New Mothership Sails, On Time And To Budget
TwitterFacebookLinkedInPinterestBuffer

Davie Shipbuilding – Canada’s leading shipbuilder – today announced that it has completed the construction, commissioning and sea-trials of the first Resolve-Class Naval Support Ship, Asterix. The ship was delivered on time, to budget and most importantly, at an internationally competitive cost. The ship departed Québec City 23 December 2017 en-route to Canadian Forces Base Halifax where she will enter service with the Royal Canadian Navy and be operated by Federal Fleet Services Inc.

Her crew of 36 Canadian merchant sailors together with Davie personnel and industry contractors sailed the 26,000-tonne ship on her maiden voyage. During the journey, they completed the testing of her propulsion and navigation systems and state-of-the-art military systems. Upon arrival in Halifax, the ship will welcome aboard members of the Royal Canadian Navy to begin integration training during the month of January 2018 prior to supporting Canadian naval operations from February 2018, for the next 10 years. 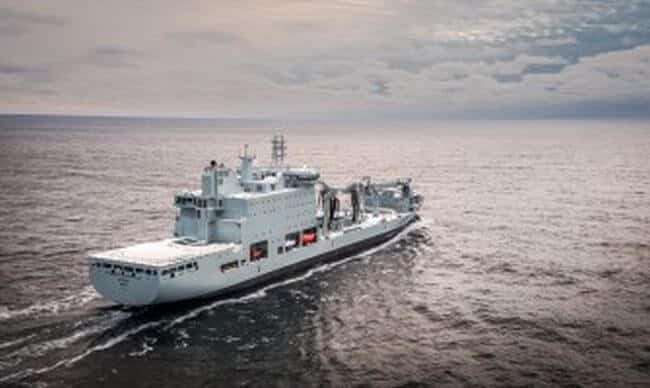 The delivery of Asterix represents the first new naval support ship to enter service with the Royal Canadian Navy in over 50 years. It is also the first large naval platform to be delivered from a Canadian shipyard in over 20 years and the first naval ship to be delivered since the launch of the National Shipbuilding Strategy.

“The delivery of this ship is an innovation showcase for Canadian industry and marks an important new era in Canadian maritime power, for it once again allows the Royal Canadian Navy to independently deploy globally for combat, peacekeeping and humanitarian operations. To see the Resolve-Class as just another naval ship is too simplistic. It is truly a force multiplier which will provide a globally deployable operating base for the Canadian Forces,” said Spencer Fraser, CEO of Federal Fleet Services Inc.

The Resolve-Class Naval Support Ship, Asterix, was designed by Rolls Royce to meet the highest and most stringent of NATO and Lloyds Register requirements to support military operations, specifically for its primary Replenishment-At-Sea functionality but also in terms of systems redundancy, damage control, ammunition storage and other systems onboard.

“This is a proving point for Davie. When we began this program, we looked at what DND had been planning with the Joint Support Ships since 2005 and we quickly realized that the 26-year old German design could be improved upon. For example, having only two replenishment-at-sea stations would mean that it does not fully meet the latest NATO requirements, which crucially calls for four stations. So, we set out to build an innovative, modern design of a naval support ship with the latest, state-of-the-art systems that would be fully compliant to meet Canada’s international and NATO commitments yet also provide a purpose-built platform for responding to humanitarian crises. We wanted to deliver a ship which would rival or exceed the best of the world’s naval support ships. Working closely with our partners in the RCN, the Canadian government and Canadian industry from coast-to coast, we can state categorically that we achieved our goals today,” commented Alex Vicefield, Chairman of Davie Shipbuilding.

EXMAR’s Tango FLNG Sets Sail To Argentina
EMP And F-WAVE To Develop Innovative Solar Power Solutions For Maritime Applications
Want to share your tips and advice? Got questions? Visit the community forum to ask questions, get answers, meet people, and share your tips!