British engineering group Rolls-Royce said it would cut 600 jobs in its Norwegian-focused marine business in response to the lower oil price, a move it said would have a “broadly neutral” impact on 2015 profits.

Rolls-Royce is in the middle of a cost-saving plan in its aero-engines business and headquarters, axing 2,600 jobs, and the streamlining of its marine business comes after a year of profit downgrades and cancelled orders.

The company said that from 2016, the job cuts in marine would help generate 25 million pounds ($39 million) of benefits.

Shares in Rolls-Royce were down 1 percent at 1220 GMT, following the announcement about its marine unit, which accounted for about 12 percent of group revenues in 2014. 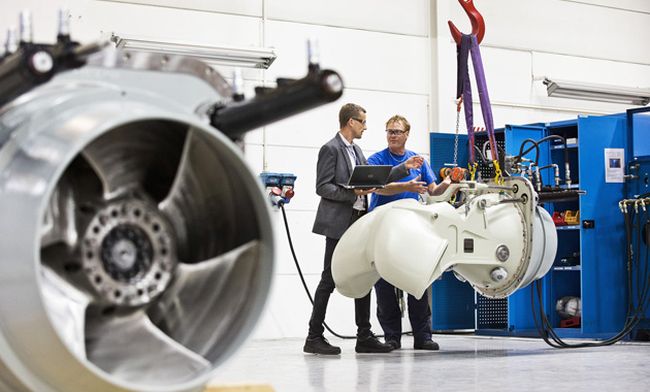 Employing 6,000 people, the unit builds propulsion systems, winches and anchors for ships, and depends on oil and gas-related customers for about 60 percent of its business.

“The effect of low oil prices means we have to continue to look for further efficiencies,” Rolls-Royce Marine president Mikael Makinen said in a statement on Monday.

The price of Brent oil collapsed from $115 a barrel to $45 a barrel between June 2014 and January this year as supply swamped the global market. It was trading at around $67 a barrel on Monday, well below its 2011-14 average of around $108.

Half of the 600 jobs cuts would be in Norway, where the Marine unit’s main manufacturing facilities are located, with the other half at the company’s other global locations, Rolls-Royce said.

Following a troubled year, Rolls-Royce announced in April that Chief Executive John Rishton was stepping down, to be replaced from July by Warren East, the former chief executive of chip designer ARM.

Rolls-Royce, the world’s second-largest maker of aero-engines, in November said it would cut 2,600 jobs over 18 months, mostly in its aerospace division, as part of a plan to boost profitability in that part of the business, where margins have lagged bigger rival General Electric.