The battery pack that Rolls-Royce has been commissioned to equip the Ryvingen with will have an available capacity of 2,000 kilowatt hours (kWh). A substantial increase from the 850 kWh capacity that is installed aboard its hybrid sister ship the Bøkfjord. It is also has twice the capacity of Norway’s first fully electric car and passenger ferry, Ampere. 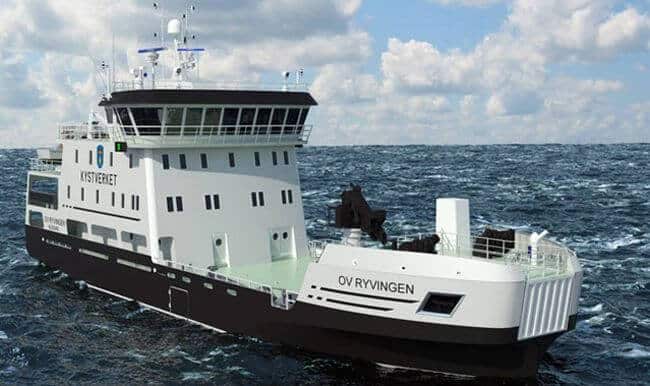 The Ryvingen has an operating profile that allows it to run on battery power alone for several hours, without using the diesel engine. In addition, the batteries will provide power when the vessel is docked, so the diesel engines will not have to be kept running. The batteries can be recharged from an onshore power supply in ports where this is available.

Kurt-Ivar Gram Franck, Norwegian Coastal Administration, Project Manager, said: “We named our first hybrid vessel last September. Later that year, it was named Vessel of the Year in Denmark, where it was built. We are now taking this concept one step further, and are looking forward to taking delivery of a ship that is even more innovative and environment friendly.”

Both the Bøkfjord and the Ryvingen are multipurpose vessels, which perform operations relating to oil spill protection and the maintenance of shipping lanes. They are the third and fourth vessels in the Norwegian Coastal Administration’s fleet renewal programme, comprising of six to eight ships.

Rolls-Royce has signed its contract to deliver the hybrid system with the shipyard, Fitjar Mekaniske Verft, in Norway. This partnership has resulted in state-of-the-art technological advances. For example the Ryvingen’s innovative ability to reuse heat from the vessel’s engine in an environmentally friendly manner sets it apart from its sister vessel. The vessel stores and reuses the surplus heat from its main engine to heat the crew’s quarters when the ship is in port. 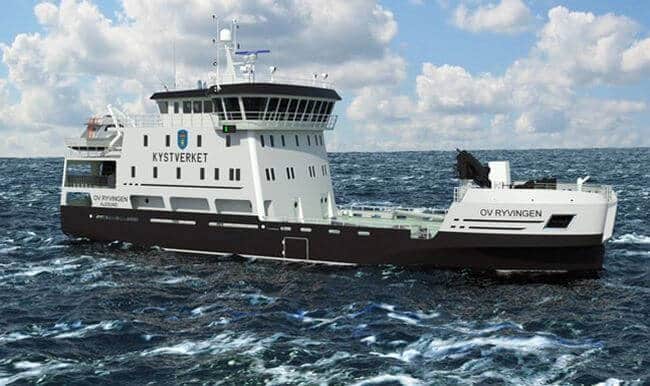 In addition to the hybrid system with two generators and the battery pack, Rolls-Royce will also deliver an extensive equipment package, including: a Bergen main engine, permanent-magnet azimuth propulsion propellers and thrusters, the automation system, SAVe CUBE electrical system, Dynamic Positioning (DP), and control systems.

John Roger Nesje, Rolls-Royce, General Manager Sales, said: “A complete systems delivery like this enables us to think efficiency and low emissions throughout the ship’s equipment. For example, the Ryvingen’s main engine will be connected to our electrical system, which means its rotational speed can constantly be varied depending on the load. So we save energy here as well.”

The complete equipment package will also cut noise and vibration levels on board, making the Norwegian Coastal Administration’s two newest vessels better workplaces for their crews. The 46.6m long and 12m wide OV Ryvingen is scheduled for delivery towards the end of 2018.