You are here: Home › Shipping News › Rolls-Royce To Provide Propulsion For The Largest High-Speed Catamaran In Mediterranean
TwitterFacebookLinkedInPinterestBuffer

Rolls-Royce is to supply four 20-cylinder Series 8000 engines from MTU to Australian shipyard Incat Tasmania. The engines will be installed in the new high-speed ferry to be used by the Virtu Ferries company on the Malta-Sicily service that it operates daily throughout the year. The vessel is 110 m in length and can accommodate 900 passengers plus crew and 167 vehicles on 490 truck lane metres. The RoPax ferry is set to be the largest high-speed catamaran operating in the Mediterranean. The MTU brand is part of Rolls-Royce Power Systems.

MTU has worked together very successfully in the past with ship owner/operator Virtu Ferries who has several catamarans in service on the Mediterranean and Adriatic. 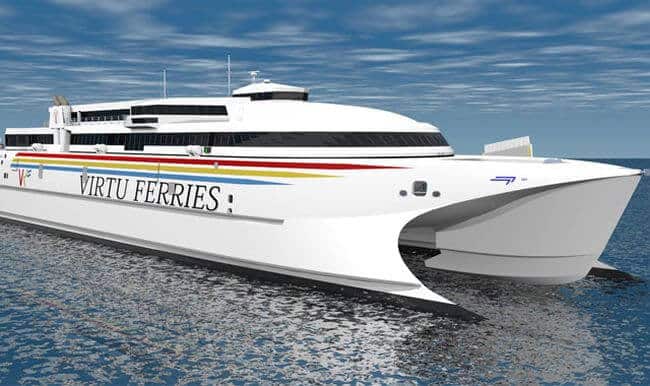 Francis Portelli, ‎Managing Director at parent company Virtu Holdings Limited, said: “We already have three ferries with MTU propulsion. These engines are light in weight, and we’re very satisfied with them and especially with the after-sales support so MTU was naturally our choice for our new ferry.”

Knut Müller, head of marine and defence business at MTU, said: “We’re delighted that Virtu Ferries has again chosen MTU, particularly since this is the first time we’re supplying Incat with our biggest engine – the Series 8000. Our past cooperation on the delivery of Series 4000 units was very successful.” Over 250 Series 8000 engines have been sold so far, and having clocked up over 1.4 million operating hours in total, have more than proven themselves in the propulsion of ferries, yachts and naval vessels.

Besides the four 9,100-kW engines, MTU will also be delivering four 8V 2000 M51A gensets to Virtu Ferries. The new Virtu RoPax ferry will shuttle between Malta and mainland Europe throughout the year, and the crossing from Malta to Sicily will take just 90 minutes at a speed of 38 knots.

The keel-laying is planned for June 2017, while the engines are scheduled for delivery to Incat in the second half of 2018.