The ship sailed to Norway from Tsuji Heavy Industries shipyard in Jiangsu, China, via Singapore, and subsequently LNG bunkerings in Cochin, India and Cartagena, Spain. This was the longest voyage ever undertaken by a vessel running solely on LNG and was completed in Bergen on 29 March.

Tor Arne Borge, Nor Lines, CEO said: “The success of the voyage from Asia to Europe on LNG not only confirms the energy-saving and emissions-reduction attributes of Rolls-Royce’s pure gas engine but provides evidence to owners of larger tonnage that LNG is not just for short sea coastal ships. The Environship concept with the Bergen engine has exceeded all our expectations.” 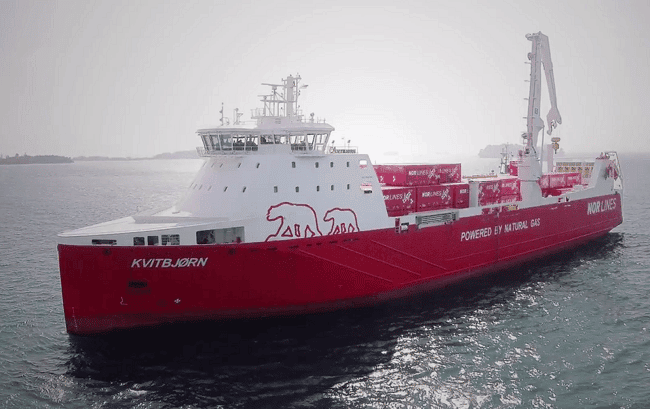 The Environship, which can be adapted for different ship types, incorporates a range of Rolls-Royce technologies to deliver efficiency savings for ship owners. These include a Bergen engine powered by LNG, the Promas combined rudder and propeller, a hybrid shaft generator to optimise use of electrical power and an innovative wave-piercing hull design. The combined technologies that make the Environship concept reduces CO2 emissions by up to 40 per cent compared to similar diesel powered vessels, dependent on operational profile.

It is important to note that the Bergen B35:40 gas engine is not a dual-fuel engine. A pure gas engine and shaft generator driving a controllable pitch propeller is the most effective configuration for keeping emissions low and improving fuel consumption.”

This arrangement is coupled with a hybrid shaft generator for electric Power Take In (PTI) which ensures flexibility and redundancy of the system when needed. John Knudsen, Rolls-Royce, President- Commercial Marine, said: “We congratulate Nor Lines on the delivery of Kvitbjørn, and wish the company every success in their future steps towards a greener shipping industry. The success of this historic delivery voyage will give encouragement to those customers looking to embrace more environmentally friendly ship designs and technology.”

Kvitbjørn is about to enter operation delivering cargo in ports between Hamburg, the Netherlands and the Norwegian mainland’s most Northern city, Hammerfest. Nor Lines expects to take delivery of sister ship Kvitnos in June.