Hai Yang Shi You 525, the first of two tugs built by the Zhenjiang shipyard for CNOOC, features a propulsion package based on twin Rolls-Royce Bergen C26:33L9PG engines and a pair of highly reliable Rolls-Royce US 205 CP azimuth thrusters to ensure the tugs have rapid manoeuvring and strong bollard pull capabilities.

A successful sea trial has proven an extra gain for both ship speed and bollard pull. 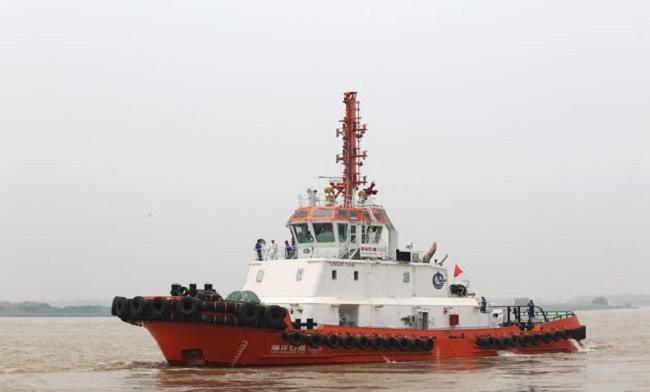 “This order marks a new era for tugboat propulsion technology in China. As its shipbuilding industry shifts focus from standard designs to more sophisticated tonnage, more owners and operators will see the benefit of using cleaner, more efficient fuelling solutions for their vessels.”

John Knudsen, Rolls-Royce, President – Commercial Marine, said: “We congratulate CNOOC and the Zhenjiang shipyard on the completion of Asia’s first gas-powered tug. China is one of the world’s largest importers of natural gas and already has the LNG infrastructure in place. This is a pioneering project in Asia and its success has been dependent on the excellent cooperation between CNOOC, Shanghai Bestway Engineering, Zhenjiang Shipyard and Rolls-Royce.”

The decision to operate on LNG follows the Chinese government’s 2011 plan to strengthen its maritime base with the manufacture of high-end, ecologically-efficient ships and technology.

The Bergen C26:33 gas engines reduce CO2 emissions by 25 per cent and NOx emissions by up to 90 per cent. Oxides of sulphur and particulate are also removed, minimising emissions along coasts and inland waterways.