Rolls-Royce and Goa Shipyard Limited (GSL), a premier defence shipbuilding yard in India under the Ministry of Defence, have agreed to cooperate in the local manufacturing of technologically-advanced MTU Series 8000 engines in India. Under the agreement, which was signed today at India’s leading defence trade show Defexpo, the companies will assemble the 16-cylinder and 20-cylinder MTU Series 8000 engines at GSL’s new facility in Goa. The MTU brand is a worldwide leader in large diesel and gas engines and complete propulsion systems and part of Rolls-Royce Power Systems.

The agreement includes transfer of MTU technology related to localising of engine components, engine assembly, testing, painting and major overhauls. MTU Series 8000 engines are the largest and most powerful MTU diesel engines with a power output of up to 10 MW. They are fitted onboard all Offshore Patrol Vessels (OPV) recently constructed or currently under construction in India. This includes eleven Coast Guard OPVs by GSL (six completed and five under construction), five Naval OPVs under construction at Reliance Defence Engineering and seven Coast Guard OPVs by L&T. 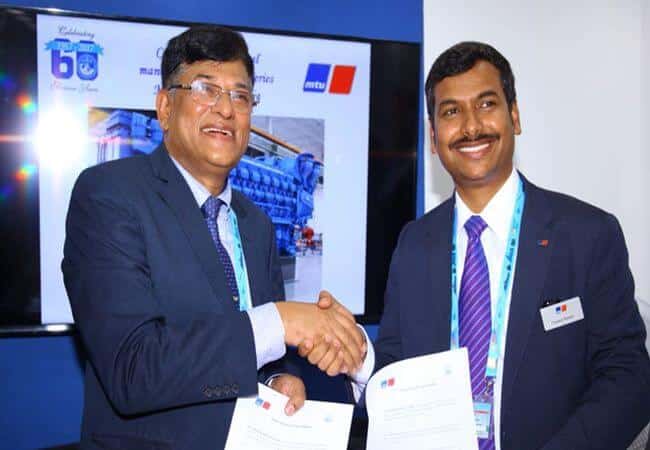 RAdm (Retd) Shekhar Mital, NM, Chairman & Managing Director of GSL said: “In line with the thrust on indigenization and ‘Make in India’ initiative of the MoD, Government of India, GSL has been on the forefront for increasing the indigenous content onboard vessels constructed at GSL. Since main diesel engines constitute the heart of a ship and are among the major high value imported equipment items onboard ships, the collaboration will aid to significantly increase the indigenous content onboard ships constructed in India. It will also provide a strategic edge to Indian Defence Sector as know-how and infrastructure for such niche technology will now be available with a PSU Shipyard, which can be gainfully utilised by the Indian Navy and Indian Coast Guard. For some time we have been on the lookout for acquiring such technology of marine propulsion engines and we are thankful to our partners Rolls-Royce and MTU Friedrichshafen for choosing us as collaborator. Under the agreement we will be catering for marine propulsion requirements within the country in the range of 7 to 10 MW. The new facility being created by GSL will also undertake all major overhauls of these engines.

This venture will be a game changer. Plans are in place to progressively increase the indigenous content and with a strong manufacturing base in India, we are confident of achieving significant indigenous content in these engines. Besides creating self-reliance for India, it will usher in new opportunities for the local industry for indigenisation. I’m sure that with favourable Government policies and thrust on indigenisation, this collaboration will be highly successful.”

Praveen Mohan, Director & CEO, MTU India, said: “The agreement with GSL to manufacture MTU’s most-advanced Series 8000 engines in India is a significant milestone and further reinforces our commitment to ‘Make in India.’ We have been working with the Indian defence sector for several decades and our well-proven MTU engines propel and power many vessels of both the Indian Coast Guard and Indian Navy. We are committed to collaborating with our stakeholders to help support the country’s vision of indigenisation and self-reliance.”

MTU Series 8000 engines are the top-selling propulsion engines in their power class for naval vessels. They are also proven in ferries and yachts and have altogether completed over one million operating hours. Series 8000 engines are available in the power range from 7 to 10 MW. They feature low overall operating costs, high power density and environmental compatibility. Common rail fuel injection combined with the electronic engine control system make it possible to achieve fuel consumption levels of less than 200 g/kWh and very low exhaust emissions. Series 8000 engines are certified as marine engines in accordance with all accepted classification standards worldwide. They were also awarded Naval Vessel Rules (NVR) certification by the American Bureau of Shipping (ABS) in 2014 and are subsequently the first advanced technology engines in this power class to meet the stringent requirements of this certification.