You are here: Home › Shipping News › Research Has Begun To Utilize Floating Wind Farms As Vectors For The Spread Of Invasive Species
TwitterFacebookLinkedInPinterestBuffer

Research begun by the Scottish Association for Marine Science (SAMS) looks at how floating wind farms could provide a new route for invasive species to spread across the oceans.

The movement of marine species from their native territory to other regions where they can have devastating effects on local ecosystems is regarded as one of the greatest threats to ocean biodiversity. Policies to combat the problem have so far focused on preventing the transportation of aquatic or marine microbes in the ballast of cargo ships. 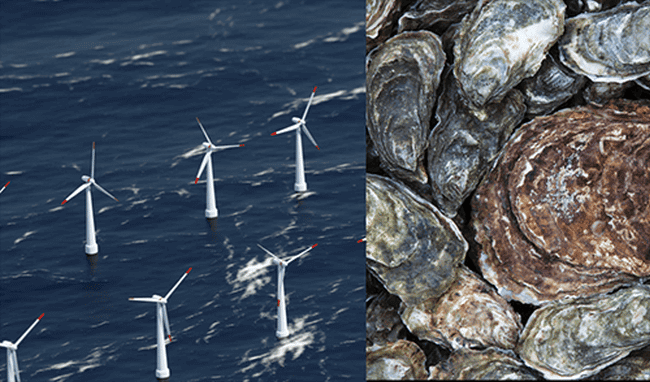 However, SAMS’ Ian Campbell has won the Institute of Marine Engineering, Science & Technology (IMarEST)’s Stanley Gray Fellowship to fund research into the dangers posed by a new generation of floating wind farms as a further vector allowing invasive non-native species to reach new habitats. While conventional offshore wind turbines stand on concrete foundations drilled into the seafloor, floating turbines, as their name suggests, are mounted on a floating structure that allows the turbine to generate electricity in water depths where bottom-mounted towers are not feasible.

Campbell has chosen Hywind Scotland, the world’s largest such installation, as the focus of his work. Managed by the Norwegian energy company Statoil, Hywind will float 15 miles off Scotland’s east coast by Peterhead. The base of each turbine comprises a floating steel tube containing ballast, which is tethered to the sea bed. He will study the impact of taking the floating turbines from their port of assembly on the Norwegian west coast to its release in Buchan Deep and the near shore habitats on the east coast of Scotland. The new farms may represent “a new and unquantified” path for the movement and spread of invasive species.

The IMarEST’s Stanley Gray Fellowship, which provides post-graduate students working on a PhD a payment of up to £12,000 ($14,579) throughout their research, will allow Campbell to complete this work.
He said: “In the short term, it will mean being able to undertake a baseline assessment of the Norwegian west coast, install experiments at assembly port and test settlement panels on the turbines prior to their departure for Scotland.”

Longer term, the Fellowship will let Campbell start building a knowledge base for supporting future floating developments and the wider marine sector. “It will allow me to present findings at conferences and workshops as well as published literature to the wider research community.”

IMarEST’s Technical & Policy Director Bev MacKenzie commented: “We were very impressed by the details of Ian’s research work, which considers an important issue as we move towards a future where energy increasingly comes from renewable sources.”