On 17 August 2016, while conducting search and rescue operations off the Libyan coast, the MSF rescue vessel Bourbon Argos was approached and attacked by a group of armed men onboard an unidentified speedboat. MSF strongly condemns this violent act towards a medical humanitarian organisation whose sole objective in the Mediterranean is to conduct search and rescue activities in the absence of safe and legal channels for those fleeing armed conflict, disasters and extreme poverty, who lack safe and legal channels to flee.

The attack occurred 24 nautical miles north of the Libyan coast. Armed men on board the speedboat fired shots toward the Bourbon Argos from a distance of 400 to 500 metres and then boarded the vessel. There were no rescued people onboard that day, and neither the crew members nor the MSF staff were harmed. 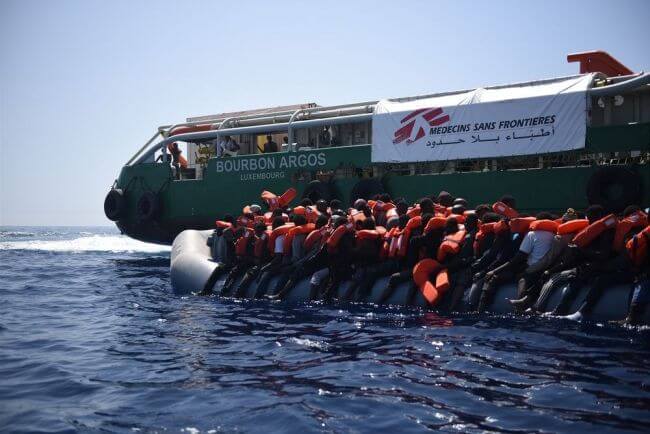 “Although we don’t know the identity of the attackers or their motivation, our initial assessment of the facts shows that they were professional and well-trained,” said Stefano Argenziano, MSF operations coordinator. “This was a serious and worrying attack, with shooting toward our boat which could have put our staff in acute physical danger.”

It was 9.15am when the incident began and the boat was spotted. Given the lack of clear identification and communication or any radio answer from the speedboat while approaching the Bourbon Argos, the team took the precautionary measure to move to the designated safe area inside the vessel.

The armed men boarded the Bourbon Argos and moved around, leaving after approximately 50 minutes, without stealing or removing anything. The damage to the ship was minimal, with signs of several bullets shot. Thanks to the sound security procedures enacted, all team members were safe as they remained in the protected area all the time.

Search and rescue activities conducted from Italy and Malta by MSF in the central Mediterranean will continue onboard the Dignity I and another rescue vessel, the Aquarius, which is operated in partnership with the organization SOS Méditerranée. MSF and its partners will continue providing lifesaving emergency care and medical assistance to those rescued.

“With the number of deaths continuing to dramatically increase and the deteriorating situation in Libya, we continue to consider the European focus on deterrence and security dangerously myopic and completely inadequate to respond to this crisis,” said Argenziano. “Search and rescue is only a palliative measure to cover the lack of safe and legal channels, but today more than ever there is a need for the EU and its member states [to ensure] a proactive mechanism to save lives and assist those in search of safety”.

MSF continues to insist on the need for safe and legal alternatives for those crossing the central Mediterranean as the only way to stop deaths at sea.