The 2015 IMO Award for Exceptional Bravery at Sea is to go to Aviation Survival Technician Christopher Leon (United States), for risking his life to save four men from a sinking ocean-going rowing boat in a dramatic rescue in the dead of night in heavy seas in the Pacific Ocean.

The IMO Council, meeting for its 114th session in London, endorsed the decision of a Panel of Judges that Mr. Leon’s actions, including staying on the sinking boat with one of its crew for more than two gruelling hours while the rescue helicopter refuelled, merited the top award.

The Council further endorsed the decision that the other two crew members of the rescue helicopter CG-6531, Lieutenant Scott Black and Aviation Maintenance Technician Michael Spraggins, should both receive a Certificate of Commendation for their part in the rescue. 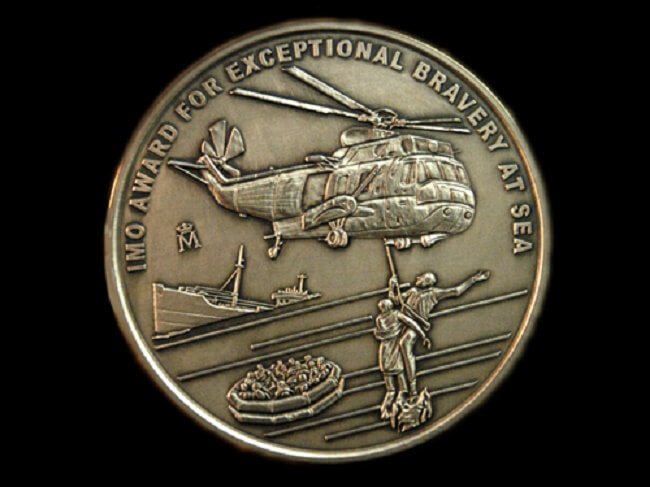 The Council also decided that, of the other nominees or groups of nominees, from a total of 27 nominations, received from 10 Member States and two non-governmental organizations in consultative status with IMO, four should receive Certificates of Commendation and three should receive Letters of Commendation.

Recognition for merchant ships involved in rescue of migrants

The Council endorsed the Secretary-General’s proposal that all merchant vessels involved in the rescue of migrants around the world be given special recognition, as a separate activity from the IMO Award for Exceptional Bravery at Sea.

The three crew of the rescue helicopter CG-6531, US Coast Guard Air Station San Francisco, were nominated by the Government of the United States of America.

On the night of 20-21 June 2014, the rescue helicopter was directed to provide assistance to the ocean rower Britannia with four people on board, 60 mile offshore Monterey, California. The Britannia was taking part in the Great Pacific Race between Monterey in California, and Honolulu in Hawaii. The support vessel for the ocean row boat race had been unable to rescue the rowers due to bad weather conditions, when the Britannia began to take on water in 30 knot winds and 15 foot waves.

When rescue helicopter CG-6531 arrived at the scene, the Britannia was all but submerged, while the darkness of night, lack of visual cues and horizon, and breaking wave action compounded the difficulty of the rescue.

AST2 Christopher Leon was deployed and, battling the rough seas and swift currents, swam to the waterlogged vessel. It was determined that the safest option for rescue would be for survivors to be taken into the water and hoisted in a rescue basket. As AST2 Leon entered the frigid waters with the first survivor, they were immediately swept away. With extraordinary strength and stamina, maintaining a firm grasp on the shocked survivor and swimming hard to keep them both afloat, AST2 Leon managed to lift the survivor into the swaying basket, enabling the flight mechanic to hoist him to safety.

The Britannia had now drifted more than 500 yards away from the helicopter and was obscured by high waves and low freeboard. AST2 Leon was recovered by the aircrew, repositioned and redeployed to the vessel to prepare the remaining three survivors for pickup. In view of the declining fuel reserve of the helicopter, the crew decided to depart from normal practice and hoisted two survivors simultaneously, directly from the sinking vessel.

With their fuel nearing critical low levels, the crew made the difficult decision to leave AST2 Leon and the remaining survivor behind. The aircrew deployed the helicopter’s only life raft to AST2 Leon and the terrified survivor but the raft was swept away by the gale force winds. Without regard for his own safety, AST2 Leon made the decision to remain aboard the swamped vessel with the survivor who by then had become hypothermic. For more than two hours, AST2 Leon huddled over the survivor in the tiny bow portion of the swamped vessel that remained above water to protect him from the breaking waves and frigid temperatures.

After delivering the first three survivors to awaiting emergency services at San Luis Obispo Airport, 90 miles away, the crew refuelled and flew back to the drifting Britannia, where they performed two more demanding hoists to recover the last survivor and AST2 Leon, in continued turbulent weather conditions and pitch blackness. The survivor was finally delivered to Monterey Airport, in demanding weather conditions, to awaiting emergency medical services.

Ceremony for 2015 IMO Award for Exceptional Bravery at Sea

The Awards ceremony is expected to take place at IMO Headquarters, on Thursday, 9 November 2015, at the end of the first day of the IMO Council 28th extraordinary session.

Nominations are scrutinized by an Assessment Panel made up of members of non governmental organizations in consultative status with IMO, under the chairmanship of the Secretary-General. Subsequently, a Panel of Judges meets (under the chairmanship of the Chairman of the Council, with the participation of the Chairmen of the Maritime Safety Committee, the Marine Environment Protection Committee, the Legal Committee, the Technical Cooperation Committee and the Facilitation Committee) to consider the recommendations of the Assessment Panel and to select the recipient of the Award.

The recipient of the Award is invited to a special ceremony at IMO to receive a medal and a certificate citing the act of exceptional bravery performed.

There are three categories of honour: first, the Award itself, for the nominee judged to have performed the most outstanding act of bravery from among those described. Secondly, certificates of commendation are awarded to nominees who have committed acts of extraordinary bravery. And, thirdly, letters of commendation are sent to those nominees who are judged to deserve some special recognition for meritorious actions.