You are here: Home › Shipping News › Rescue Diver From China Who Saved Three From Sunken Cargo Ship To Be Recognized With IMO Bravery Accolade
TwitterFacebookLinkedInPinterestBuffer

A rescue diver from China who made a series of underwater dives to rescue three people from a sunken cargo ship will receive the 2018 IMO Award for Exceptional Bravery At Sea. A Panel of Judges decided that the rescue merited the highest award. The decision was endorsed by the IMO Council at its 120th session in London (2-5 July). 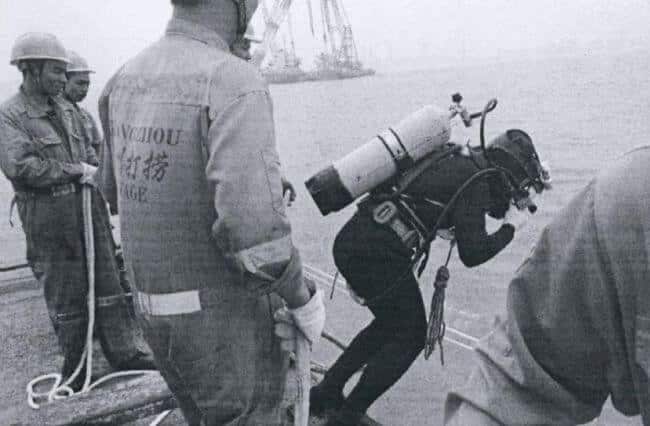 Following a collision with another ship, in Guangzhou Port, China, in the early morning of 27 November 2017, the bulk carrier M.V.Jin Ze Lun sank. Of the 14 crew on board, two were immediately rescued by local maritime authorities but 12 remained missing. The bulk carrier was lying on the seabed, in the main channel into the port. A strong current would make the underwater search and rescue operation extremely difficult.

Mr. Zhong Haifeng, senior diver and deputy of the Engineering Team of Guangzhou Salvage was put in charge of the desperate search for survivors. After 36 hours of repeated dives, six survivors were located – trapped in the cargo hold. Mr. Zhong instructed his team to replenish oxygen to the cabin and talk to the trapped survivors, to calm them.

Mr. Zhong then dived down to the cargo hold alongside a teammate, bringing scuba diving equipment for those trapped underneath. In the afternoon of 28 November, Mr. Zhong dived down six times. He taught survivors how to put on and use scuba diving equipment and personally rescued three of them in the space of one hour, despite becoming extremely exhausted. The Panel of Judges agreed that by personally exerting tireless efforts under highly dangerous circumstances, Mr. Zhong demonstrated truly exceptional bravery and the human spirit.

Mr. Zhong was nominated for the award by China.

The 2018 IMO Award for Exceptional Bravery at Sea will be presented during an IMO Awards ceremony to be held on 6 December 2018 at IMO Headquarters in London.

This annual Award was established by IMO to provide international recognition for those who, at the risk of losing their own life, perform acts of exceptional bravery, displaying outstanding courage in attempting to save a life at sea or in attempting to prevent or mitigate damage to the marine environment.
Nominations are scrutinized by an Assessment Panel made up of members of non governmental organizations in consultative status with IMO, under the chairmanship of the Secretary-General. Subsequently, a panel of judges (made up of the Chairs of several IMO bodies) meets to consider the recommendations of the Assessment Panel and to select the recipients.