You are here: Home › Shipping News › ReCAAP ISC Warns of Increasing Cases Of Abduction Of Crew From Ships
TwitterFacebookLinkedInPinterestBuffer

The ReCAAP ISC is deeply concerned about the situation of abduction of crew from ships while underway in the Sulu-Celebes Sea and eastern Sabah region. Since March 2016, there has been 11 incidents with nine actual incidents and two attempted incidents occurred in the area. Most of the incidents are claimed by the terrorist group of the Philippines Abu Sayyaf Group (ASG). 44 crew were abducted and 11 crew among them are still in captive.

Please see below the location map of the consolidated incidents occurred from March to November 2016 in the Sulu-Celebes Seas and eastern Sabah region. 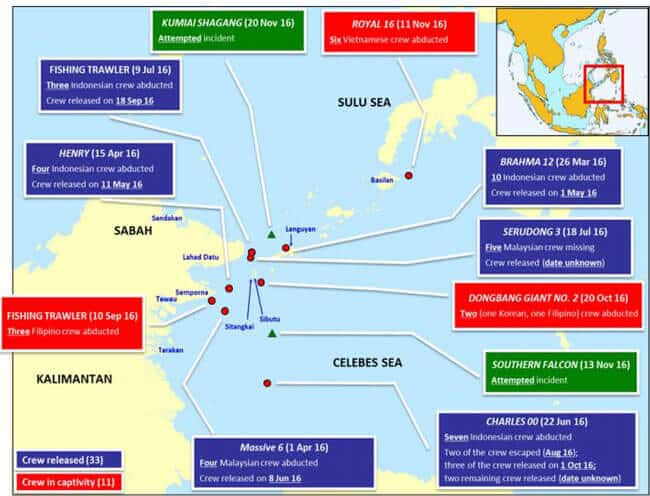 The ReCAAP ISC reiterates its advisory to all ships to re-route from the area, where possible. Otherwise, ship masters and crew are strongly urged to exercise extra vigilance while transiting the area and report immediately to the following Centres:

(1) Operation Centre in the Philippine Coast Guard District Southwestern Mindanao for monitoring and immediate responses in any eventualities.

Shipping industry is advised to adopt relevant preventive measures taking reference from the “Regional Guide to Counter Piracy and Armed Robbery Against Ships in Asia”.

Debmarine Namibia To Invest In World’s First Ever Custom-Built Diamond Recovery Vessel
Want to share your tips and advice? Got questions? Visit the community forum to ask questions, get answers, meet people, and share your tips!