Winning a better deal for women is the title of the ITF’s new union resource, the women’s best practice guide, which has received ‘rave reviews’ from delegates during maritime union meetings this week.

The guide, developed off the back of a survey of affiliate unions around the world, focuses on: the importance of organizing women working in maritime industries; challenges for unions representing maritime women; pursuing women’s issues through collective bargaining; representing women in union structures; and leadership and strategies for increasing women’s participation in unions.

Following the introduction of the guide to unions by ITF women’s coordinator Alison McGarry during the annual dockers’ and seafarers’ conferences in Chicago, ITF president Paddy Crumlin said: “This guide is another great display of our commitment to support the development of women and ensure they are established in our workplaces and in our unions. We should always endeavour to do better around this issue and we need a constant reminder of the stats which show us that the participation of women is still not high enough in our unions. When women are involved they do more than their share, we just need to increase the numbers.” 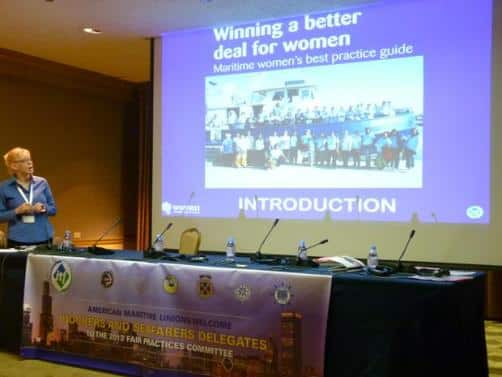 Reactions from the floor were also positive. Mick Doleman, deputy national secretary of the Maritime Union of Australia praised the guide and made reference to the work of the ITF and individual unions around tackling violence towards women. View his comments here.

Following the introduction of the guide ITF inspector in Oslo, Angelika Gjestrum spoke about the benefits of related women’s leadership training. Take a look at what she had to say here.

Find out more about the work of the ITF women’s department here.