Qatargas is proud to announce that Qatargas Ras Laffan Terminal Operations (RLTO) has safely loaded the 10,000th cargo shipment of the non-LNG product in Ras Laffan Industrial City (RLIC). Since starting operations in 2006, the dedicated teams at Qatargas have efficiently and reliably loaded more than four billion barrels of product to customers all over the world. With demand continuing to grow for the vast array of products produced in RLIC, RLTO is entrusted to handle approximately one million barrels of oil equivalent of product every single day. 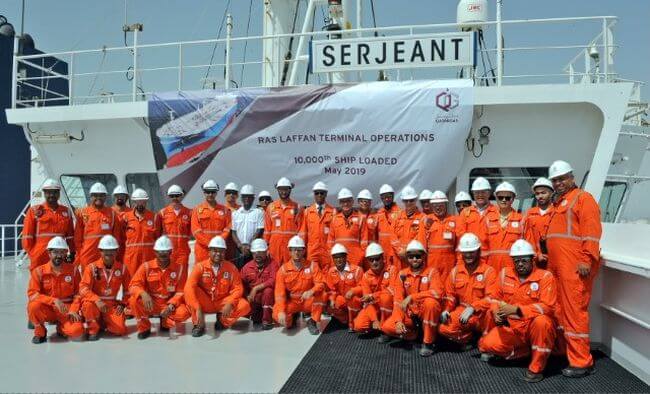 The ceremony began with speeches by Qatargas Chief Operating Officer – North and Chief Operating Officer – South, followed by the presentation of a commemorative plaque to the Master of the ‘Serjeant’. Captain C. P. Gupta thanked Qatargas for their trust and expressed his appreciation for choosing the ‘Serjeant’ as the 10,000th vessel to load from the Ras Laffan Terminal Operations facility at Ras Laffan.

Qatargas RLTO was launched in 2006 as the single operator responsible for the storage and loading activities of non-LNG hydrocarbon liquids and sulfur produced in Ras Laffan Industrial City. With one operator managing the safe storage and loading of non-LNG products, significant economies of scale were captured, and personnel were safeguarded with uniform safety standards.