In another important step towards bringing its rigid sail technology onto ships Eco Marine Power (EMP) is pleased to announce that work has commenced on the production of an EnergySail in Onomichi, Japan. This first ever factory produced EnergySail is being manufactured by EMP’s strategic partner – Teramoto Iron Works.

The EnergySail® (patent pending) is an automated rigid sail device that enables ships to utilize the power of the wind to reduce fuel consumption and lower vessel emissions. It can also be fitted with flexible marine-grade solar panels or other devices and used to charge batteries or the electrical power can be fed into EMP’s Aquarius MAS + Solar solution.

Longer term the EnergySail will be a critical element of EMP’s patented Aquarius MRE system. Aquarius MRE® is an advanced integrated system of rigid sails, solar panels, energy storage modules, sensors and marine computers that will enable ships to tap into renewable energy by harnessing the power provided by the wind and sun. The solar power component of Aquarius MRE has already been released for commercial use. 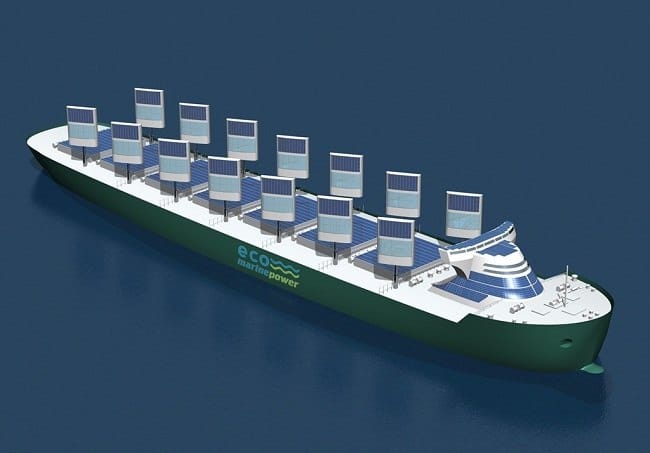 EMP’s EnergySail technology is scalable and can be applied to vessels ranging from coastal freighters to large passenger ferries and cruise ships. EMP is also studying along with a number of other companies, variations of the EnergySail design that could be applied to unmanned surface vessels (USV’s) and marine robotic vessels (MRV’s). Elements of the technology might also be suitable for offshore marine renewable energy platforms.

The production and shore-based testing of the EnergySail is schedule to be completed in the 2nd half of 2016. This will be followed by an extended evaluation phase including trials on-board a ship and consultation with classification organisations.

EMP is also currently working to finalise the sensor package for the EnergySail. This will allow for the device to be fully automated when linked to the EnergySail Automated Control System (ACS). The EnergySail ACS is being developed in co-operation with KEI System of Osaka, Japan.

The Furukawa Battery Co., Ltd. is also involved in the EnergySail project and will provide an energy storage solution.

EMP will exhibit some of the EnergySail related technologies at Sea Japan 2016 in Tokyo between 13th-15th April.