The port authority of the Port of Itaqui and the administration of the Panama Canal formalized on Wednesday, 5, a collaboration alliance with the objective of promoting the use of the channel by ships to or from Itaqui, as well as to promote partnerships in technical areas. The document was signed in a ceremony held in Panama by the president of EMAP – Empresa Maranhense de Port Administration, Ted Lago, and by the administrator of the Port Authority of the Panama Canal, Jorge L. Quijano. 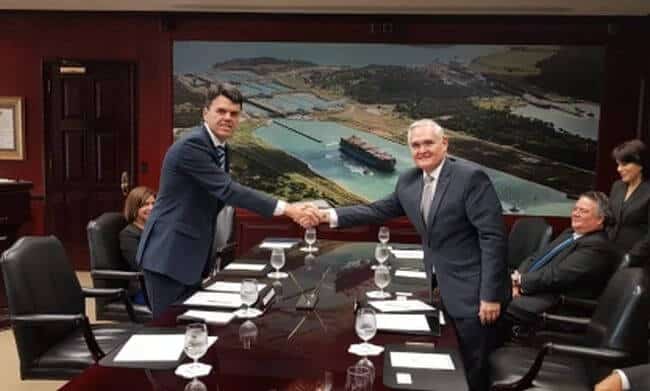 The program in Panama included a visit to the new locks (Cocolí Locks) and presentations on the environment, water conservation, reforestation and conservation of the Canal basin and on the competitive differentials of the Port of Itaqui. “This agreement is very important to enable the movement of grain to Asia through the Canal, providing even more competitiveness to Itaqui and already contemplating the growth of grain handling by Arco Norte,” said Ted Lago. Of all soybeans sourced by Itaqui Port, 80% goes to Asia.

This year Itaqui has hit successive records in monthly grain movement. From January to October, more than 8 million tons of soy were disposed of by the public port of Maranhão. The brand represents an increase of almost 40% in relation to the volume handled in all the year 2017.

With the second phase of the Tegram, the perspective for the next years is of increase of capacity and handling of grains. “This agreement will strengthen all the logistics of Arco Norte, which today accounts for more than 21% of all soy and corn exported by Brazil,” analyzes the president of EMAP.

The location of Itaqui Port is strategic because of its proximity to international markets – it is the first port of entry and the last port of departure for Asian markets (short travel in about seven days in comparison with the ports of the South and Southeast of Brazil).

With these advantages and the alliance of cooperation with the channel’s port authority, Itaqui may have access to new markets, especially commodity markets of the west coast of America and Asia. There is also a potential for Itaqui in the future to become a hub port of containers.

To meet this demand was delivered in 2017 the infrastructure required for storage of containers and general cargo. The investment of R $ 9,199,220.08 includes the construction of a courtyard in an area of 20,250 m², equipped with outlets to meet the demand for refrigerated containers. At the same time, the State Government has been working on increasing the number of productive chains, in order to make container handling viable.

The alliance established is aimed at promoting grain shipments on the trade route from northern Brazil to destinations in countries located in the Pacific. The two sides are committed to working cooperatively to improve the transportation service in their areas of influence and promote the growth of global trade. The scope of the alliance covers joint commercial activities, information exchange, market research and modernization.