Port Tampa Bay approved a public-private partnership agreement with four other entities to divvy up who will pay for a $60 million widening and extension of the Big Bend Channel.

The strategic partners include the U.S. Army Corps of Engineers, the Florida Department of Transportation (FDOT), Tampa Electric Co. and Mosaic Co., a global fertilizer company which is one of port’s largest tenants along with Tampa Electric. The port’s board of commissioners unanimously approved the participation agreement at a monthly meeting on Tuesday.

The Big Bend Channel connects to the Tampa Harbor main channel and will be deepened from 34 feet to 43 feet and widened from 200 feet to 250 feet to accommodate larger ships. 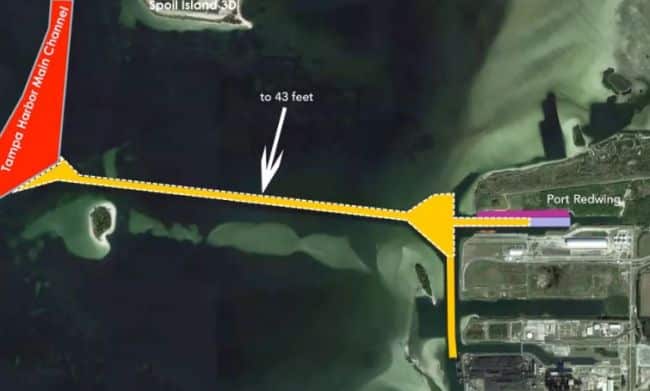 The Army Corps estimates the expansion to cost more than $60 million, but future bids may wind up higher or lower than that. Bids are not expected until March 2018. Project funding from the partners would be due at that time.

The federal government promised $9 million and plans to take over maintenance costs of approximately $1 million, according to Ram Kancharla, vice president of planning and development at the Port Tampa Bay. FDOT has pledged to pay 50 percent of the balance after the federal commitment and has given the port $5.7 million so far. The others — TECO, one of the region’s major power providers, and Mosaic, a global producer of fertilizers, both use the Big Bend Channel. — and will be disproportionately responsible for the remaining funds.

“This is the largest project we have worked on at the port,” said Paul Anderson, CEO and president of Port Tampa Bay, adding it’s “almost impossible” to get private and public companies to come together to dredge a federal channel. “This is a historic and legacy project.”

Separately, Port Tampa Bay on Tuesday also unanimously approved the use of a portion of $4.2 million in Florida Seaports Transportation and Economic Development Council (FSTED) funds to improve two existing berths. The port will pay more than half of the reconstruction costs with the other portion coming from FSTED funds and state grants. The update to Berth 219 will cost $8.6 million and Berth 3 is estimated at $6.3 million.

Port Tampa Bay expects the project to be completed in 2019.

A bipartisan group of Florida members of the House of Representatives penned a letter in March claiming the Big Bend Channel represents a $50 million economic development initiative with the potential to create 8,000 jobs.

The port has also invested $30 million into the growing Port Redwing maritime complex the Big Bend Channel will serve.

The port listed its Big Bend project as one of its strategic priorities in the Vision 2030 Master Plan.

High Seas Need To Preserve Biodiversity Through Mobile Protected Areas
Want to share your tips and advice? Got questions? Visit the community forum to ask questions, get answers, meet people, and share your tips!