You are here: Home › Shipping News › Port Of Rotterdam Throughput Increases By 3.9% Making A Good First Half
TwitterFacebookLinkedInPinterestBuffer

With an increase in throughput of 3.9%, the port of Rotterdam can look back a good first half year. There was growth in eight of the ten market segments. The only falls were in the volumes of mineral oil products and other liquid bulk. In particular, the volume of containers handled (9.3% in TEU, 10.4% in tonnes) was the determining factor for the overall growth in throughput. 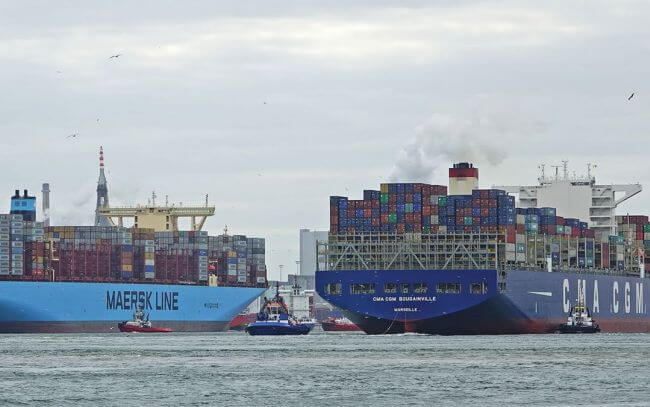 Several companies announced major investments this half year, indicating business confidence in the Rotterdam port and industrial complex. Those investments consolidate the importance of the complex for the Dutch economy.

Sea port dues decreased by 0.4% (€0.6 million) to €146.0 million, while throughput increased by 3.9% because of a fall in some market segments of the average price per tonne due to the prevailing price structure. Income from contracts rose by 1.3% (€2.2 million) to €173.8 million. ‘Other operating income’ increased as a result of an accounting change and so revenue as a whole went up by €8.3 million to €342.3 million. To meet the corporation tax requirement effective 1-1-2017, 25% (€31.4 million) of the result has been earmarked, and profit after taxation is therefore €97.8 million. This is comparable with the result over the same period last year, when the interest rate swap was partially bought off for €32.0 million. The result is in line with expectations.

Ports in neighbouring countries receive considerably more support on a structural basis from their national governments than their Dutch counterparts. For example, there are now plans in Germany to halve the tariffs for rail transport, Dutch ports are the only ports that the European Commissioner requires to pay corporation tax, and the European limit for state aid has been raised to €150 million. In view of the importance of the port of Rotterdam and the challenges facing the port and industrial complex, support is needed that is comparable to neighbouring countries.