At the end of September we shall be launching two new services to South America. This follows European Union demands concerning Maersk’s takeover of the Hamburg Süd shipping line. Rotterdam will be the first port of call in Europe in both sailing schedules.

Following the takeover, the EU demanded that Hamburg Süd end its vessel sharing agreement with MSC Mediterranean Shipping Company on South American and other routes. Consequently, on 27 September, MSC and Hapag-Lloyd will launch a new service to South America with a fleet of nine vessels. A day later, Maersk and Hamburg Süd will launch a service operated by eight vessels, each with a capacity of 10,500 TEU. 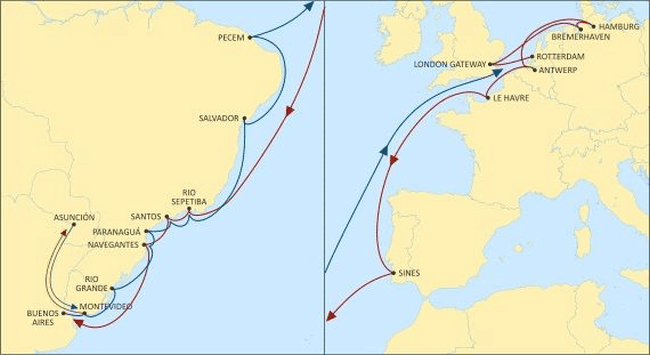 With the MSC-HL alliance, the voyage from Pecem in Brazil will take twelve days. From Rotterdam, the vessels will sail to London, Bremerhaven, Hamburg, Antwerp, Le Havre and the Portuguese port of Sines before crossing the Atlantic. In South America, they will call at Rio Sepetiba, Santos, Navegantes, Buenos Aires, Montevideo, Rio Grande, Paranaguá and Salvador.

Various types of cargo will be heading west from Europe. From Brazil, Uruguay and Argentina the cargo heading east will consist mostly of natural produce such as fruit, meat, coffee and wood. It is for this reason that additional provision has been made for reefer containers.

The Maersk-HS service, dubbed the ‘Samba’, will sail from Rotterdam to London, Hamburg, Antwerp, Le Havre and Algeciras. After the crossing, the vessels will call at Santos, Paranaguá, Buenos Aires, Montevideo, Itapoá, Paranaguá, Santos, Pecem (in the fruit season) and Tangier. The ‘Cap San Lorenzo’ will be the new service’s first vessel to sail out of Rotterdam on 28 September.