The Port of Rotterdam Authority wants to develop the port into the place where the energy transition takes shape. “The Netherlands is faced with the challenge of making the economy and society virtually CO2 neutral within 30 years. The sooner we take this on the better. The port area has many companies that use fossil resources to make fuels and countless chemical products. These companies emit a lot of CO2, but also have a lot of knowledge about energy, energy-intensive production processes, and CO2 reduction.

This makes the Port of Rotterdam exceptionally well-positioned to be an international leader in the development and large scale application of technologies to reduce industrial CO2 emissions virtually to zero. The Port of Rotterdam Authority intends to play a pioneering role and make the port an inspiring example for the global energy transition,” says Allard Castelein, CEO of the Port of Rotterdam Authority. “The knife cuts both ways: we are fighting climate change while making sure that Rotterdam’s port and industrial complex will continue to be a strong contributor to Dutch prosperity and employment after 2050.” 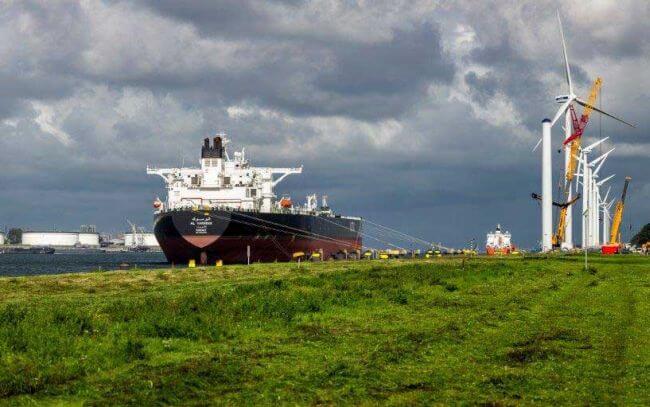 The Port of Rotterdam Authority is making efforts to develop every possible initiative that could contribute to the transition to a CO2 neutral economy. The Port Authority believes that to be CO2 neutral by 2050, the Netherlands needs a wide range of different technologies and measures. A lot of research and experimentation is still needed to determine the optimal path to a CO2 neutral economy by 2050. Allard Castelein: “We will be working all out to find that route. We are confident that the Rotterdam industrial complex has a strong starting position. And we think that forging ad hoc coalitions for concrete projects is the best way to make progress.

Businesses will play a leading role, with companies that are already based in the port as well as newcomers. The Port Authority wants to help these companies to implement ways to reduce CO2 and/or introduce new, climate-neutral industry as much as possible. We want maximum sharing of experience because this helps to accelerate the transition. Precisely because there is already so much energy-intensive industry here, this is the most logical place for companies to set up and scale up pilot projects. This will make the port a leader in the transition from fossil fuel based industry to clean fossil, renewable and circular. We can be both a field lab and flagship at once.”

The Rotterdam port and industrial complex is the largest in Europe and has many operations based on fossil energy and resources, but now also the largest biobased cluster in Europe. Rotterdam already has companies in all these segments that are among the best in the world in their market, the best port infrastructure in the world, and is located in a region that is attractive for a variety of projects. Examples include the heating demand in the immediate surroundings and the location on the North Sea, with its empty gas fields and wind turbine development.

There is a lot of knowledge in the Netherlands about energy issues, and Rotterdam has worked hard on its innovation climate in recent years. Rotterdam is also one of the best in terms of efficiency and the use of residual flows from the fossil fuel industry. And finally there are major opportunities for significant CO2 reduction: 18% of Dutch CO2 is emitted here and the industry here also makes fuels and products that lead to CO2 emissions elsewhere. In other words, this is the best place to make progress on creating climate-neutral solutions for the industry and to be an example for other locations.

Not a matter of course

Being and remaining the leader does not come automatically. It begins with the understanding that we need to address the Paris Climate Agreement quickly and energetically. That is why the Port Authority is actively looking for companies that want to set up operations that contribute to CO2 reduction in the port. These could be companies from outside as well as businesses that are already active here, or combinations of these. The largest investments will generally have to be made by the companies themselves, but the Port Authority will offer support with attractive accommodation conditions, connecting infrastructure, support with permit applications and finding financing, etc.

When it comes to crucial investments to realise the energy transition, the Port Authority is also prepared to make its own risk-bearing investments or to participate in companies. The government’s role is primarily to use legislation and regulations to stimulate the transition and to maintain a consistent long term policy that focuses on achieving a final objective in 2050 with intermediate objectives on the way to this goal. There is also a role for governments (regional, national, European) to contribute financially to research and the financial gap for pilot projects. PPPs and specific investment funds can help with this.

In Rotterdam, a lot of work on projects that lead to CO2 reduction is already underway. Examples include using residual heat from the port for district heating, a pilot project for carbon capture and storage, production of biofuels and bioplastics, the use of LNG as ship fuel, a substation for electricity that is generated at sea, and the initiative for a Waste-2-Chemicals plant.

By ensuring that the Port of Rotterdam is and stays a leader in the energy transition in the coming decades, the Port will remain an attractive place for investment in modern, low CO2 technologies. Research and pilot projects in Rotterdam and elsewhere in the Netherlands can help to build a strong knowledge base around this theme, which can then be applied internationally. This makes the accelerated transition in the Port of Rotterdam good for the economy, employment and reputation of the Netherlands.

Developments in technology, markets and policy will be important to determine how quickly the energy transition actually occurs in the coming years. But during this period the Port Authority’s efforts, in manpower and resources, will increasingly shift toward efficiency in the use of fossil fuels, CO2 reduction, renewable energy and biobased and circular economies. Because that is where the future lies.