You are here: Home › Shipping News › Port Of Philadelphia Receives First Call From THE Alliance
TwitterFacebookLinkedInPinterestBuffer

THE Alliance made its first call to the Port of Philadelphia’s Packer Avenue Marine Terminal (PAMT) this morning as part of its Northern European, AL1 (Atlantic Loop) service. THE Alliance, short for Transport High-Efficiency Alliance, is one of three major shipping alliances. The shipping lines who make up THE Alliance include: Hapag-Lloyd, K-Line, Mitsui OSK, NYK and Yang Ming. “This is extremely significant”, said Philadelphia Regional Port Authority (PRPA) CEO Jeff Theobald. “This gives Pennsylvania and regional exporters more options to get to Europe. Most of these lines have never had direct container service into the Port of Philadelphia.”

The arrival of the M/V YM Essence with a capacity 4,600 TEUs (containers), is the first call by these lines under the vessel sharing agreement known as THE Alliance. Shippers now have additional options for cargoes originating to and from North Europe. Years of growth in the number of distribution centers/fulfillment centers located in the Lehigh Valley and central Pennsylvania, South Jersey and Delaware have resulted in a major distribution hub in the Port of Philadelphia’s backyard. 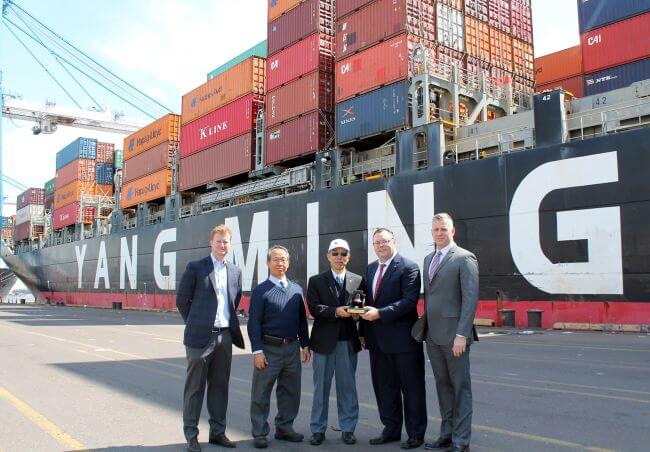 Ports of call for the AL1 will be: Philadelphia, New York, Halifax, Bremerhaven, Antwerp, London Gateway and Norfolk.

“Every Wednesday Philadelphia area shippers can now depend on competitive weekly service to/from North Europe”, said Thomas Holt Jr., President of Astro Holdings, Inc. (the lessee of PAMT). “It’s great to have a carrier like Hapag-Lloyd and the partners calling the Port of Philadelphia again from Europe.” The last time Hapag-Lloyd called the Port of Philadelphia with a European service was the late 1980s. “It’s important to note that Hapag-Lloyd and Yang Ming are current customers of the PAMT from other trade lanes. This new string will solidify them as main stay customers in the port and bring new carriers into the community.”

Ocean carriers form alliances to reduce costs, mostly by sharing vessels. Recent industry consolidations have resulted in several new alliances and THE Alliance is one of the most important. “As THE Alliance partners work in the Port of Philadelphia and see our efficiencies, we are optimistic they will want to introduce new additional services here”, said Miriam Borja-Fisher, President of the World Trade Association of Philadelphia.