The Port of Virginia® in April processed 245,933 TEUs (twenty-foot equivalent units) in April, making it the busiest April in the port’s history.

The strong cargo performance was driven by an increase of more than 22 percent in loaded import containers, which lead to an increase in the truck, rail and barge volumes. The port’s March volumes were disrupted by the Chinese New Year, which led to the late arrival of vessels and blank sailings: April’s import volume reflected a return of the cargo.

“We knew April was going to be a productive month and as we move toward peak season, this and higher volume levels will become normal, but we are more prepared for these increases than ever before,” says John F. Reinhart, the CEO and executive director of the Virginia Port Authority. “We are just weeks from completion at Virginia International Gateway (VIG) and debuting this world-class facility in its entirety. The productivity and efficiency we are seeing there is going to be instrumental in managing and effectively processing peak season volumes.” 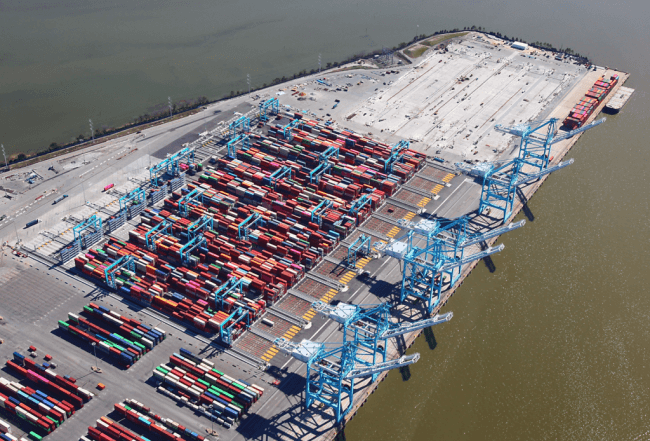 To date at VIG, 13 new container stacks serviced by 26 new rail-mounted gantry cranes (RMGs) have been delivered, four new truck gates have been opened, a new terminal operating system has been implemented, the berth has been lengthened by nearly 800 linear feet and four new ship-to-shore cranes have been placed into service. The last step is completing the second phase of the on-dock rail yard.

“We are going to be fully-operational at VIG in very short order,” Reinhart says. “The project is on-budget, on-time and we are out aggressively marketing the benefits of doing business at The Port of Virginia.”

The expansion at Norfolk International Terminals is progressing according to schedule. There are 12 new stacks served by 24 new RMGs already in service. Work on phase II of the stack yard expansion (six stacks) began in December 2018 and is nearing completion; work on phase III (12 stacks) begins this month.