As a part of the European project H2PORTS, led by Fundación Valenciaport and in which the Port Authority of Valencia also participates, the Centro Nacional del Hidrógeno (CNH2) is developing a Hydrogen Refuelling Station (HRS) that will guarantee the supply of this fuel, in suitable conditions, during the simultaneous operation of the other two pilots that will be tested throughout the project: a Reach Stacker, at MSC Terminal Valencia, and a terminal tractor 4×4 at Valencia Terminal Europa, part of Grimaldi Group, both powered by fuel cells.

Since each of these pilots will take place in different terminals inside the port of Valencia and taking into account that the equipment cannot circulate outside the terminals area, the HRS developed will be a flexible and mobile solution. 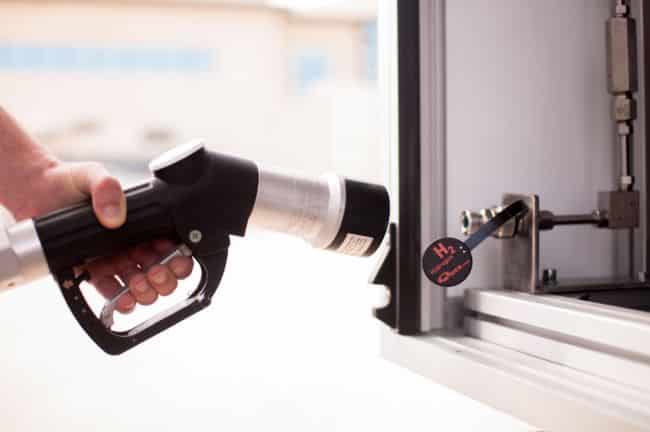 The HRS will include three main subsystems: a low-pressure hydrogen tank on which the hydrogen supplier will discharge the molecule, a two-stage water-cooled piston hydrogen compressor with heat exchangers integrated into the system, and a mobile high-pressure storage and hydrogen supply unit, that comprises two stages of hydrogen storage at 300 and 450 bar and a heavy vehicle dispenser at 350 bar.

The availability of a supply infrastructure in the port of Valencia will create the perfect environment for the testing of possible future uses of hydrogen fuel cells in the maritime port sector, which is intended to be exploited not only during the trial period but also after the completion of the project.

The European project “H2Ports – Implementing Fuel Cells and Hydrogen Technologies in Ports” coordinated by Fundación Valenciaport, in close collaboration with the Port Authority of Valencia, and financed by the Fuel Cell and Hydrogen Joint Undertaking (FCH JU) programme, has as main objective to test and validate hydrogen technologies on port machinery that allow to have applicable and real solutions without affecting the performance and safety of port operations and producing zero local emissions.

Thanks to this initiative, the Port of Valencia will be the first port in Europe to incorporate hydrogen technologies to reduce the environmental impact of its operations.

Hydrogen is an alternative fuel that can replace those of fossil origin, such as gasoline or diesel. Hydrogen can be obtained from renewable electricity and is presented as a necessary alternative in the medium to long term to achieve a sustainable and carbon-free economy. While the use of fossil fuels involves the emission of carbon dioxide, which contributes to climate change, and of a number of pollutant emissions with great impact on public health (NOx or particles), the use of hydrogen in combination with fuel cells produces only water vapour and has no impact on the environment.