Last month, an investment of USD 31 million in asset replacement and capacity improvements over the past year at the Port of Salalah paid off. The Port recorded the highest productivity ever achieved in the region.

The Port of Salalah is Oman’s major regional gateway port and transshipment hub, located on the Arabian Sea. With an annual capacity of around 5 million TEU, the port set a new productivity record this month, delivering 412.97 Port Moves per Hour (PMPH) on vessel Cap San Tainaro. The Port handled 3,820 moves in a port stay of 9.25 hours.

Referencing improvements in standards of work, safety and reliability achieved as part of APM Terminals Hub Excellence Program Mark Hardiman, Chief Executive Officer of the Port of Salalah said: “Our customer-centric approach and the commitment of our employees has been the key to our continued success. 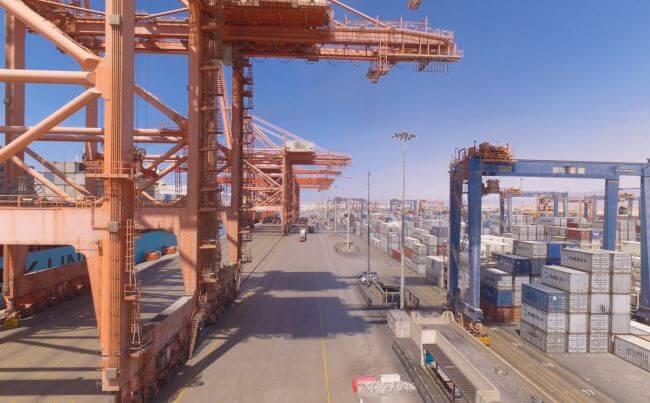 We continue to place a very high emphasis on safety and focus on continuously improving our processes to deliver world class productivity. In the competitive environment of the transshipment business, delivering these levels of performance enhances the overall value proposition of Salalah to the shipping line in terms of network cost savings and reliability.”

The USD 31 million investment over the last year is part of a long-term equipment renewal and deployment plan, which proactively addresses evolving changes in the shipping industry – including vessel profiles and customers’ operational requirements. Investments also support new business initiatives at the port, such as ship-to-ship liquid transfer operations which were introduced last year.

The RTGs incorporate a number of features designed to be safer, more environmentally-friendly and reduce equipment downtime. These new machines also demonstrate the Port’s commitment to safety, operational leadership and to running an environmentally conscious business looking to reduce its carbon footprint.

To cater to the growing customer base, the port has also purchased a state-of-the-art pilot boat Najm-2, which joined the existing pilot boat Najm-1 to assist in marine operations. Najm-2 is a high-speed vessel with state-of-the-art navigation systems fitted and special propeller tunnels to increase propulsion e¬fficiency, and reduce drag, vibration and noise levels.

Container and general cargo capacity at the port have now been fully restored following damage caused by Cyclone Mekunu early last year. Cargo volumes moving through the port of Salalah in the first six months of 2019 were higher than in the equivalent period of 2018, although last year’s performance was impacted negatively by Cyclone Mekunu. Salalah handled 1.94 million TEU in the six months to the end of June 2019, 10% up on the first half of 2018. General cargo movements rose 8%, to 8.19 million tons in this period.

APM Terminals has a 30-year concession agreement with the government of Oman to build and manage the port’s world-class container facility until 2028. APM Terminals holds a 30% stake in the Port operating company Salalah Port Services. Other shareholders include the government represented by ASYAD group (20%), government pension funds (23%), and others (27%).