You are here: Home › Shipping News › Port Of Rotterdam Recovers Throughput In Second Half Year Being Fully Operational
TwitterFacebookLinkedInPinterestBuffer

Europe’s largest port has been operating 24/7 during 2020. Precisely in this corona year, when society at large has been severely disrupted, the port of Rotterdam has confirmed its role as a reliable partner in the logistics chain. Goods volumes recovered in the second half year, limiting the decline in annual volume last year to 6.9% by comparison with the previous year.

The strong operating result has put the Port of Rotterdam Authority in a good position to implement an ambitious investment agenda in the years to come. That will have a major impact on employment, sustainability and society as a whole. 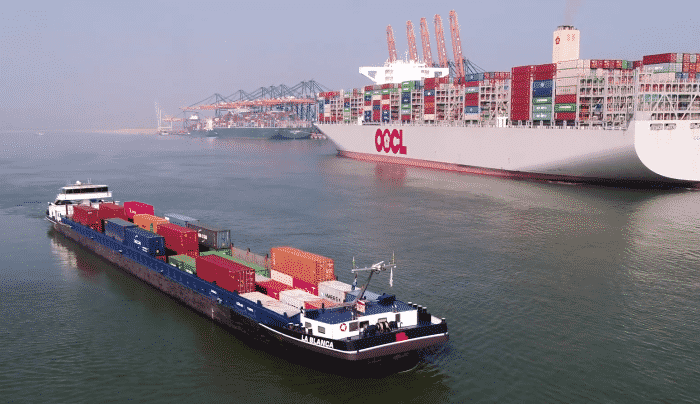 The volume of goods throughput in 2020 in the port of Rotterdam was 436.8 million tonnes. Rotterdam therefore continues to be the largest port in Europe by far. During the first half year, total throughput fell by 9.1%. However, in the second half year, that fall was 4.6% by comparison with the same period last year. Consequently, the decrease for 2020 as a whole was limited to 6.9%.

Allard Castelein, CEO of the Port of Rotterdam Authority: ‘In an exceptional year, the port of Rotterdam was fully operational, allowing goods and raw materials to continue finding their way to consumers and businesses. I thank everyone who made a contribution: our clients, the nautical service providers and the logistical partners. My special thanks go to our colleagues at the Port Authority. Despite the corona crisis, the Port Authority booked a better financial result. Working with the government, the port’s business community and partners, we have made major progress on the road to a sustainable energy system and the reduction of carbon emissions. In this way, we are having an impact. I am proud of these accomplishments.’

Dry bulk throughput in 2020 (63.8 million tonnes) fell sharply by comparison with 2019 (74.5 million tonnes). Incoming iron ore and cokes were down, mainly due to the major decline in German steel production. The throughput of energy coal was lower than in 2019. Its share in electricity production, which had already dropped as a result of the pandemic, fell off even more due to strong competition from solar, gas and record wind production. A coal-fired power station on the Maasvlakte was also shut down. A positive exception was the rise in the throughput of biomass, more of which was used in the Amer9 power station in Geertruidenberg.

The throughput of liquid bulk was 192.0 million tonnes (2019: 211.2 million tonnes). The throughput of crude oil in Rotterdam declined due to less demand for oil products. For example, demand for kerosine collapsed as air traffic came to a virtual standstill because of coronavirus. Refineries responded to falling demand by producing less and reducing capacity utilisation. In the case of oil products, the decrease was mainly attributable to less throughput of fuel oil and gas oil/diesel. Stricter international regulations relating to emissions have led to a sharp drop in demand for high-sulphur fuel oil.

As the largest bunker port in Europe, the port of Rotterdam provides shipping with a wide range of fuels and so bunker volume rose.

Container throughput in 2020 was unpredictable because of the pandemic. Initially, it was affected by the lockdown in China. After the virus spread further through Europe and the rest of the world, demand for goods fell sharply. Many services were also shut down. However, there was a strong recovery in terms of volume after the summer because consumers spent mainly on physical goods rather than services. Throughput volumes in the second half of 2020 were therefore higher than in 2019 (76.4 million tonnes as opposed to 75.7 million tonnes).

RoRo throughput volumes also varied unpredictably. After a sharp dip in the second and third quarter due to COVID-19, there was a rapid rise starting in September. Many companies stocked up at that time in anticipation of a disruption of the supply chain due to Brexit.

The Port of Rotterdam Authority’s financial results were better than in 2019. Contract revenue increased. In 2020, as in previous years, some site rental agreements with customers were renewed at market rates. The resulting additional income was partly one-off (catch-up effect from previous years) and partly structural. Revenue from seaport dues in 2020 was lower than in the previous year as a result of the fall in throughput caused by the corona pandemic. In addition, operating expenses where a lot lower than budgeted, on the one hand as a result of cost-cutting measures and on the other because of the cancellation of events and travel. That led to an operating result before interest, depreciation and taxes of € 477.5 million (2019: € 433.4 million).

The net result was € 351.7 million (2019: € 238.9 million). In addition to the one-off effects in the revenue from site rental, this result was also affected to a major extent by the fact that the planned reduction of the rate for corporation tax to 21.7% did not go ahead (remaining at 25%).

Due to its healthy financial position, the Port Authority is still able to make investments in improving the port infrastructure and making an impact on society as a whole. Gross investments, including participating interests, amounted to € 265.8 million (2019: € 338.3 million).

The Port Authority proposes to pay € 120.5 million in dividend for 2022 to the shareholders, the City of Rotterdam and the Dutch State, with € 78.7 million being paid to the city and € 41.8 million to the State.

Progress in the energy transition

The Netherlands is a signatory to the Paris climate agreement on climate change. We are convinced that we are leading the way in the energy transition in the port and industrial complex. Some highlights in 2020:

Good progress was made in the hydrogen chain with the preparations for the installation of electrolysers at the conversion park, the construction of a central pipeline through the port area and the gearing up of hydrogen imports.

The European Commission has decided that the Porthos project qualifies for a grant of € 102 million. This grant is part of the Connecting Europe Facility for energy infrastructure established by the European Union to support the development of energy from renewable sources. Porthos is a project for storing CO2 from industry under the North Sea. The Port of Rotterdam is one of the organisations behind the initiative.

In 2020, we continued to build on our strong digital base. For example:

The Port of Rotterdam Authority’s former pilot project Boxinsider has been transferred to Portbase and developed into a fully-fledged application called Cargo Tracker. This application makes it possible for companies to follow all import movements of containers in the port of Rotterdam. They receive automatic notification if there are any delays.

A successful trial has been conducted with the electricity platform Distro. This blockchain-based platform helps companies in the port to reduce energy costs by making better use of locally generated electricity on the one hand and reducing peak loads on the electricity grid on the other, contributing in this way to the climate objective of being a carbon-neutral port by 2050.

In 2020, pilot projects were implemented again with the PortXchange application for optimising port visits in collaboration with the shipping companies Maersk and MSC, and in consultation with the international maritime organisation IMO. Data sharing for ‘just-in-time’ arrivals are an effective way of making port operations more efficient and they can have a major impact on the environment because of the sharp reduction of greenhouse gas emissions.

Looking ahead to the throughput volumes in 2021, much will depend on the speed and effectiveness of national vaccination campaigns. If those vaccination programmes are effective, world trade can be expected to revive. Nevertheless, a return to pre-COVID in 2021 is unlikely given the subdued outlook for economic recovery. International travel, for example, is expected to remain limited this year, and there will be therefore less demand for oil.

Allard Castelein: ‘The day-to-day mindset of the business community in the port of Rotterdam when it comes to maintaining our strong competitive position and leading role means we can be confident about the future of the port. This is where the money for tomorrow will be earned, which is why the Port Authority itself is expecting to invest around € 1.5 billion in the next five years in the energy transition, digitalisation and infrastructure. And so we are the driving force behind employment, income and prosperity for the Netherlands. By making strong decisions and with the determined efforts of local, regional and national authorities, it will be possible to make the most of the potential created by the engine room of Rotterdam and to further the earning capacity of the Netherlands.’