The IMO2020 regulations come into effect on 1 January 2020. Those switching to scrubbers will need caustic soda to wash the exhaust gases in the closed-loop system. The Port of Rotterdam is the first port in the world to offer such loading from a bunker vessel. And that has its advantages.

The new International Maritime Organisation regulations aim to significantly reduce emissions of sulphur oxides, which are responsible for atmospheric acidification. This means that vessels may only use fuels with sulphur levels of up to 0.5 percent as of 1 January 2020.

The current permitted level is 3.5 percent. However, another option is available. Shipping companies may continue to use heavy fuel oil if they install ‘scrubbers’ on their vessels to purify the exhaust gases with a wash treatment of water and soda. 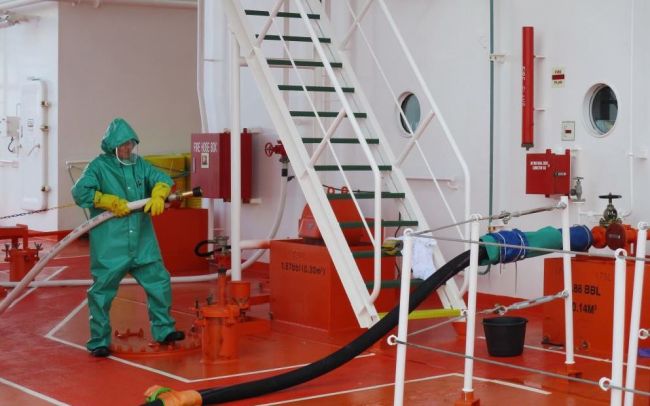 As the world’s largest bunker port, Rotterdam is well prepared for the new situation. Rotterdam does not only offer low sulphur fuel; it also offers an optimal service to those shipping companies that have decided to use scrubbers so they can continue to stoke traditional heavy fuel oil. Scrubber waste can be collected and processed, and caustic soda can be bunkered ship-to-ship. Amsterdam and Rotterdam are the only ports in the world where this is permitted; although it’s never been done in the capital city. ‘You need caustic soda for scrubbing to neutralise the sulphur dioxide levels in the exhaust gases’, explained Remy Bouman, QSHE Manager at VT Group. ‘You can optimise the scrubber operation by checking the pH balance.’

The problem with the soda is that it is a crystal that dissolves in a fifty percent water solution but that does have a high specific gravity. ‘This means that a pump from a tanker often has insufficient power to pump the emulsion from the quay upwards to a seagoing vessel’s engine room. Our bunker vessels carry 8-bar pumps, which can do this job without problem. Rotterdam is actually the only port in the world to do this.’ There are examples of vessels that approached the three ports for caustic soda but where loading was unsuccessful; they were, however, able to bunker ship-to-ship in Rotterdam.

Rotterdam’s VT Group has over twenty years’ experience in transporting caustic soda from companies including Akzo Nobel. Some eight inland vessels are involved in this in Western Europe, of which four operate from Rotterdam. Bouman: ‘We met with the Port Authority at an early stage to determine the risks of ship-to-ship bunkering. Together we identified satisfactory control measures and have been able to offer this service here for some time already. And that’s a real advantage.’

A seagoing vessel needs between 30 and 200 tonnes of caustic soda per bunkering. ‘Until now this bunkering has only taken place a couple of times a month, but we’re seeing a steady increase. Towards the New Year, this is certainly set to increase even more’, stated Bouman.