For the second year in a row, the industry in the port of Rotterdam has released less CO2 into the atmosphere. This becomes clear from new figures published by the Dutch Emissions Authority (NEA). The sector has cut its emissions by 13.6% (4.2 million tonnes) over the past two years.

The key contributor to this decrease is the closure of several outdated coal-fired plants in mid-2017. However, the power stations that burn natural gas were used more frequently, which led them to collectively produce more CO2 in 2018: an increase of 1.7 million tonnes compared to 2016. In 2018 the power sector as a whole (coal and gas-fired plants) released 27% less CO2 than in 2016 (4 million tonnes).

A striking new development that can be distilled from the NEA figures is that in 2018, the refineries managed to cut their emissions by 6.6% (0.6 million tonnes) compared to 2016. And the Rotterdam refineries are also doing quite well in the longer term: since 2005 they have reduced their CO2 emissions by as much as 20% (2.1 million tonnes), while production in the same period increased by 4%. On top of which, the facilities are making far more low-sulphur products – a relatively energy-intensive category. At the same time, we can see an increase in emissions by companies that produce industrial gases. Among other things, these companies make hydrogen, which is used to desulphurise fuels. 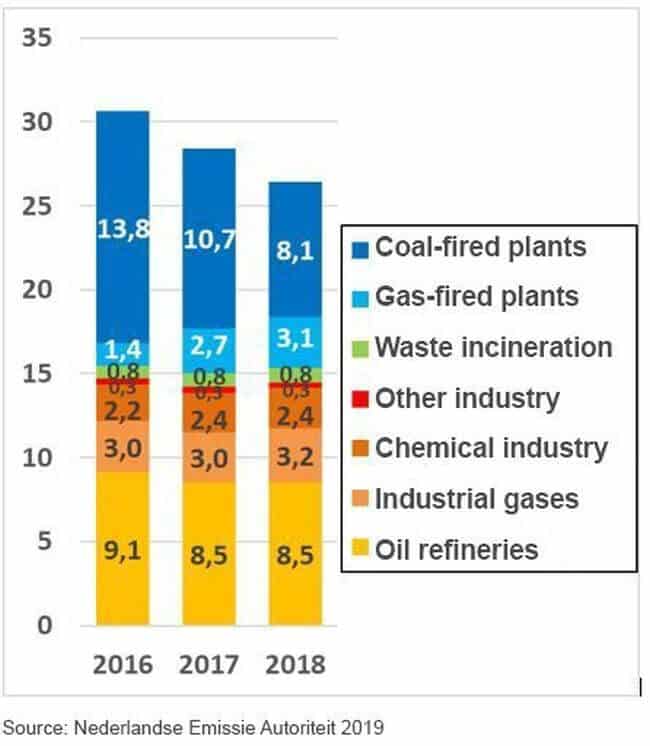 The NEA figures cover all companies that fall under the emissions trading scheme. This amounts to 96% of all emissions released by Rotterdam’s industrial sector.