On Tuesday, 7 May 2019, representatives of the Port of Rotterdam Authority and the port authority of Guangzhou met in the Chinese port to sign a partnership agreement. 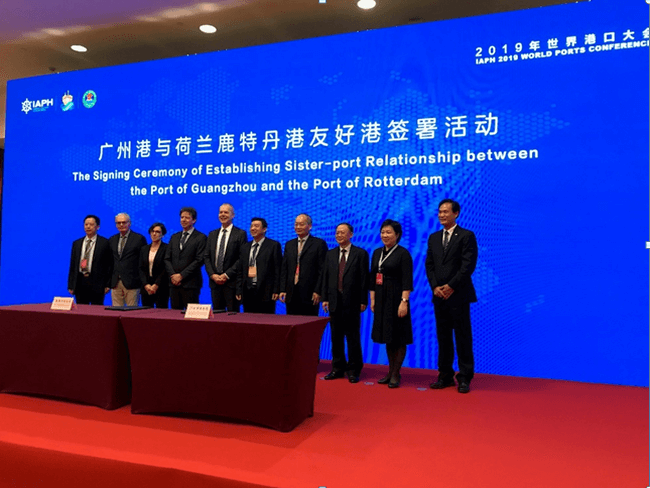 Both organisations will be sharing expertise and best practices in the field of port management. This partnership is in line with the Port of Rotterdam Authority’s strategic goals to share its knowledge and expertise with ports around the world and establish itself as a frontrunner in the development of new markets.

The port of Rotterdam has a strong international reputation thanks to its outstanding port infrastructure, robust port and industrial complex and the diversity of cargo flows and industries found in the port area. The Port of Rotterdam Authority shares its knowledge and expertise in a number of ways, including feasibility studies and participation and partnership agreements like the present agreement with Guangzhou. The Port of Rotterdam Authority has previously entered into partnership agreements with various other port cities, including Shanghai, Shenzhen, Singapore, Tokyo and the Thai port authorities.

Like Rotterdam, Guangzhou ranks as a versatile port that has grown – and is still growing – thanks to container handling, among other activities. Guangzhou is one of the world’s largest container ports, achieving a throughput of some 22 million TEU in 2018. For sake of comparison: container throughput in the port of Rotterdam in the same year was 14.5 million TEU.