You are here: Home › Shipping News › Port of Rotterdam Achieves Throughput of 232.8 Million Tonnes in the First Six Months of 2018
TwitterFacebookLinkedInPinterestBuffer

Total throughput in port of Rotterdam: 2.2% down on first half of 2017 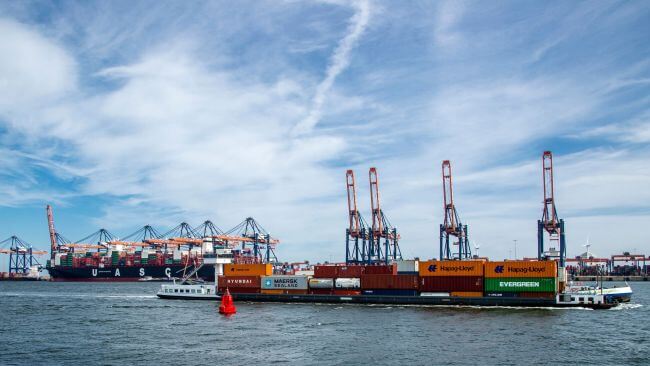 However, the rise in container handling did not offset the fall in the throughput of wet and dry bulk. The decline in bulk goods was mainly seen in the throughput of coal, crude oil and mineral oil products such as fuel oil. Coal transshipment fell because of, among other things, the closure of coal-fired power plants, lower energy production by plants that were still in operation and a reduction in the flow of cokes for the steel industry. Striking growth segments were LNG and biomass, which more than doubled by comparison with throughput volumes in the same period last year.

The financial position of the Port Authority was stable in the first half of 2018. Revenue from port dues fell off slightly but rental and leasehold income from issued land increased slightly. The result before taxation remained virtually unchanged at € 126.1 million.

Nevertheless, the net result was strongly influenced by a one-off gain as a result of the fiscal opening balance sheet, a consequence in turn of the Port Authority’s tax liability. This one-off positive result is entirely an accounting phenomenon and it is a direct consequence of the application of legislation and regulations. It does not provide the Port Authority with any additional cash or room for investment. On the contrary: the Port Authority did not have to pay corporation tax in the past but it is liable to pay corporation tax with retroactive effect from 2017 onwards. The only significance of the one-off ‘paper’ profit is that, in the future, the Port Authority will be required to pay less tax fora limited period of time.

Significant progress has been made in the past six months in the field of the Energy Transition. For example, a Climate Act was passed by the Lower House of the Dutch Parliament. In order to fulfil the ambitions set out in that Act, a large number of measures have been identified at the Rotterdam-Moerdijk Industrial Table that could result in a reduction of carbon emissions by 10 million tonnes. The Port Authority does not work at the national level only in terms of assuming its responsibility to contribute to the energy transition that is needed. Internationally also, the Port of Rotterdam Authority also seeks to collaborate with other ports that wish to lead the way in terms of sustainability and efficiency.

The authority is, for example, working with the recommendations in the Wuppertal 2 report and collaborating with leading ports in the world to develop a joint programme to improve efficiency and reduce carbon emissions, and also to promote the use of clean fuels and clean technologies in shipping.

The global economy benefits from free trade and measures that promote free trade. Import tariffs and trade quotas interfere with global trade and are therefore bad for the global economy. Relations between large trading blocks in the world are currently strained. In addition, it is uncertain whether negotiations between the European Union and the United Kingdom will lead to a new trade agreement after Brexit. Both developments are rendering the prospects for the further growth of world trade uncertain. The fluctuations in volume in the Port of Rotterdam would not, for the time being, seem to be caused by recent trade restrictions, the impact of which will be felt only after some time. The Port of Rotterdam Authority is continuing to monitor developments closely.

EU Awards EUR 5 Million To FLAGSHIPS Project For Deploying Two Hydrogen Vessels
Want to share your tips and advice? Got questions? Visit the community forum to ask questions, get answers, meet people, and share your tips!