Officials from the Port of Long Beach, Southern California Edison and the California Energy Commission today launched the nation’s largest pilot project for zero-emissions cranes and other cargo-handling equipment for seaports.

Funded mostly by a $9.7 million grant from the California Energy Commission, the project will bring 25 vehicles that are zero- or near zero-emissions to Port of Long Beach marine terminals for one year to test their performance in a real-world setting. The launch event was held at Pacific Container Terminal at Long Beach’s Pier J — operated by SSA Terminals — one of three terminals participating in the project. 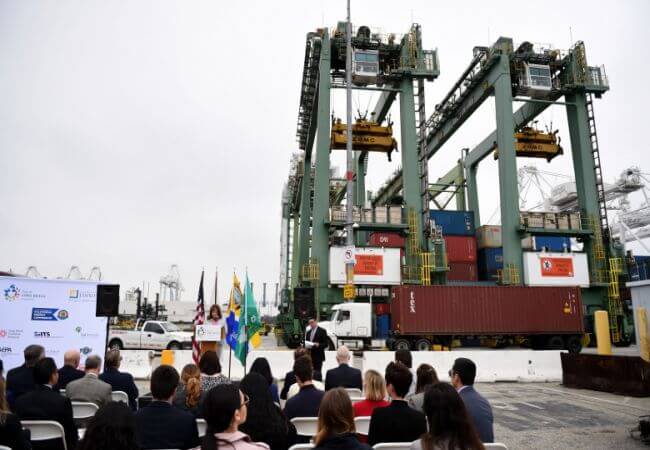 The ports of Long Beach and Los Angeles in 2017 approved an update to their Clean Air Action Plan, setting a goal of transitioning all terminal equipment to zero emissions by 2030.

“The Zero-Emissions Terminal Transition Project kicks off a new era in transportation electrification and the Port’s own transformation to zero-emissions,” said Long Beach Harbor Commission President Lou Anne Bynum. “We are grateful for the partnerships with the Energy Commission and Southern California Edison that are making this a reality.”

“This project is another example of the goods movement industry, equipment builders, utilities and public agencies stepping up to reach for the goal of zero emissions,” said Mario Cordero, Port of Long Beach Executive Director. “Today, you can see how everyone is coming together to meet that challenge.”

“The projects we are kicking off today will help to address some of Southern California’s biggest challenges — cleaning up the air and reducing harmful greenhouse gases that cause climate change,” said SCE President Ron Nichols. “SCE’s vision for a clean energy future means partnering with the Port and other SCE customers to electrify transportation, as well as working hard to make sure the electricity that we provide to power those vehicles is produced with clean, renewable resources.”

“SSA Terminals appreciates the confidence that the Port of Long Beach has shown in our company by selecting us to be part of this major project to electrify the nine large container-handling yard cranes at our Pacific Container Terminal,” said Paul Gagnon, Vice President of SSA Marine Terminals. “We hope that this partnership will continue as we all strive for cleaner air quality.”

The project is anticipated to reduce greenhouse gases by more than 1,323 tons and smog-causing nitrogen oxides by 27 tons each year. Also, the switch to zero-emissions equipment is expected to save more than 270,000 gallons of diesel fuel.

The project will include the conversion of nine diesel-electric rubber-tire gantry cranes into fully electric equipment at one terminal, the purchase of 12 battery-electric yard tractors for two more terminals, and the conversion of four LNG trucks into plug-in hybrid-electric trucks for a drayage trucking firm.