You are here: Home › Shipping News › Port Of LA Sets New Record For Cutting NOx Emissions While Moving More Cargo Than Ever
TwitterFacebookLinkedInPinterestBuffer

Emissions of nitrogen oxides (NOx), a key component of smog, are down an unprecedented 60 percent compared to 2005 emissions levels, their lowest level to date. Released, the Port’s 2017 Inventory of Air Emissions shows the Port set new record lows for emissions reductions while its container volume reached an all-time high of 9.34 million Twenty-foot equivalent units (TEUs). Overall, the 2017 findings show the Port has maintained or exceeded the dramatic clean air progress it has made over the last 12 years and has now met all of its 2023 Clean Air Action Plan (CAAP) goals. Diesel particulate matter (DPM) remains down 87 percent, and sulfur oxides (SOx) remain down 98 percent. 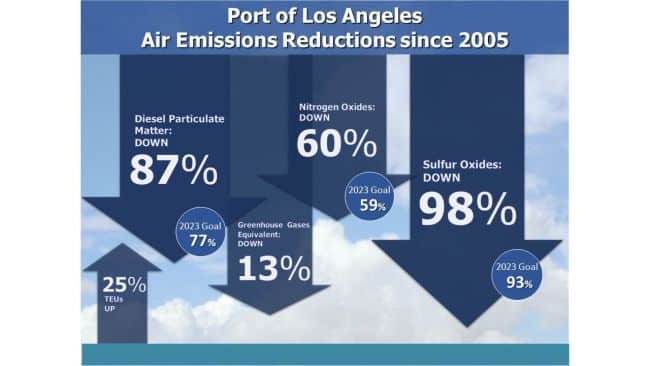 “Our port is driving the global economy forward — and showing the world how we can produce record-breaking growth and protect the environment at the same time,” said Mayor Eric Garcetti. “Our progress on reducing emissions to just a fraction of our 2005 levels — while we ship more cargo than ever— is proof that our Clean Air Action Plan is working and exceeding expectations.”

“As of this inventory, we’ve hit all our 2023 targets for tackling the primary pollutants associated with port operations during our busiest year ever,” said Harbor Commission President Jaime Lee. “This is great news for our Port, our industry and our community.”

To reduce emissions while also significantly increasing cargo volumes, the port had to reduce the average amount of emissions it generates to move each container. Using this type of measurement, the Port also posted its best year ever, lowering the average amount of emissions the port generates to move each container of cargo for all eight pollutants tracked by the Port’s emissions inventory, including greenhouse gases (GHG), which were down 30 percent per container on average since 2005.

Based solely on tonnage, though, GHGs are down only 13 percent, which is a result of the substantial increase in activity in 2017 leading to the record cargo volumes. The Port’s best year for reducing tons of GHGs was 2013 when GHG emissions were down 23 percent, a year when TEU volume was still down from its pre-recession peak.

“This is why cleaner technology and increased efficiency matter,” said Chris Cannon, Director of Environmental Management for the Port of Los Angeles. “Greenhouse gases come from burning fuel. The more cargo we move, the more CO2 emissions we generate, and greater the need to switch to cleaner low-carbon based equipment, while continuing to optimize port operations.”

The largest ships tend to be new-builds with cleaner engines, another contributor to clean air gains reported in 2017. Additionally, in compliance with California’s progressively stricter shore power requirements, more ships plugged into shore-side electricity instead of burning fuel at berth. Ships that cannot plug in increasingly used alternative technology to capture emissions at berth.

Effective 2017, all ships calling at the Port met California and North American Emissions Control Area requirements to use fuel with 0.1 percent or lower sulfur content. More ships also are reducing fuel consumption by slowing down within 40 nautical miles of the Port.

Ongoing turnover of the truck fleet and upgrades of cargo handling equipment with the cleanest available engines also helped hold the line on emissions. More than half of nearly 17,000 drayage trucks calling at the Port in 2017 have 2010 model year or newer engines. Nearly 47 percent of cargo handling equipment – including cranes, tractors and forklifts – have Tier 4 or equivalent diesel engines, the cleanest diesel emission technology on the market.

“The percentage of cargo handling equipment using the cleanest available diesel technology has nearly doubled since 2016,” Cannon said. “That’s an example of how seriously terminal operators, trucking companies and our other partners are investing in new equipment and working with us to achieve our clean air goals. We look forward to continuing to partner with them using private investment and public funding programs to develop and deploy even cleaner technologies as we move toward new CAAP goals.”

The latest findings are based on data collected during the calendar year 2017 and reviewed by regional, state and federal air regulatory agencies. The annual inventory details the impact of all strategies for reducing emissions from port-related sources: ships, locomotives, trucks, cargo handling equipment and harbour craft.

As container throughput increases, the Port is working to implement more aggressive strategies to maintain its clean air gains and continue to meet the 2023 goals.

New in the 2017 Clean Air Action Plan (CAAP) Update is targeted for reducing GHG emissions: 40 percent below 1990 levels by 2030 and 80 percent below 1990 levels by 2050. Strategies for reaching these targets include transitioning the on-road drayage fleet serving the Port to zero-emissions trucks by 2035 and all terminal equipment to zero emissions by 2030. Improving operational efficiencies, deploying advanced technology and managing energy resources are essential to this progress.

Near-term measures for accelerating clean air progress include requiring all trucks entering Port service for the first time to meet 2014 model engine emissions standards. Technology advancements expected to further reduce emissions by improving the flow of cargo include the Port Optimizer™, which gives the supply chain a head start of about two weeks to plan operations and allocate resources for handling inbound cargo.

To advance long-term goals, the Port is working with private and public sector partners to test more zero emissions drayage trucks and demonstrate near-zero and zero emissions cargo handling equipment. The Port launched a number of projects before the 2017 CAAP Update was finalized.

The Port of Los Angeles is America’s premier port and has a strong commitment to developing innovatively strategic and sustainable operations that benefit Southern California’s economy and quality of life. North America’s leading seaport by container volume and cargo value, the Port of Los Angeles facilitated $284 billion in trade during 2017. San Pedro Bay port complex operations and commerce facilitate one in nine jobs in the five-county Southern California region.