A huge offshore accommodation module has been loaded at the outer port area. The eight-storey construction is currently standing on a barge awaiting transport to an oil rig in the North Sea. The object that was shipped via Gothenburg Roro Terminal in Arendal is the largest ever. The construction process began five years ago, and now this eight-storey accommodation module, built by Apply Emtunga for the Martin Linge oilfield in the North Sea, is loaded and ready for delivery.

At 48 metres in height, 33 metres in length, and weighing some 3,000 tonnes, the module will accommodate just over 100 people. It has eight floors, and apart from offices and meeting rooms, it also has a large number of well-appointed cabins, each with a bathroom, TV and internet access. There is also a small hospital facility, a kitchen, a dining room, two TV rooms, a music room and a gym. There is a helicopter pad on the roof. 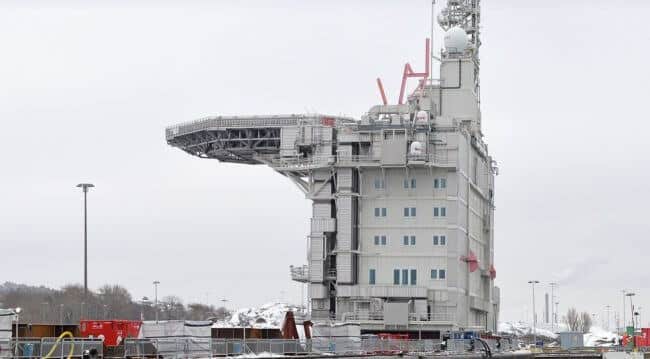 Apply Emtunga builds modules for oil platforms that are used all over the world, and its production facility is just 300 metres from the quayside at Arendal in the outer port area. Using specially constructed trailers fitted with 1,000 wheels, the accommodation module was rolled down at a maximum speed of five kilometres per hour to a specially reinforced quay.

Loading such enormous constructions naturally generates extreme ground pressure. Gothenburg Port Authority is responsible for ensuring the quays can cope, and finding solutions for relieving pressure on the quays during loading.

Annelie Albertsson, project leader at the Gothenburg Port Authority Infrastructure Department, explained: “In effect, what we did was to construct a beam to support the ramp that is placed between the quayside and the barge. The aim is to ease pressure on the quay, which would otherwise be unable to withstand the weight. The long and careful preparations prior to loading are an excellent reflection of the smooth and effective collaboration between the port authority, terminal operator and product owner.”

Following the successful loading, the module is now on board a specially constructed barge. All that remains is for it to be welded in place and secured before being towed on its 680- kilometre voyage, which it is estimated will take 36 hours. The module is bound for the Martin Linge oil and gas field in the North Sea, 116 kilometres off the coast of Norway.