You are here: Home › Shipping News › Port of Gothenburg To Commence Expansion in 2017
TwitterFacebookLinkedInPinterestBuffer

The Port of Gothenburg is set to expand with the construction of a new terminal at the outer port area. It is the largest expansion project at the port since the 1970s. The terminal will be built using dredging spoils and is expected to be completed at some point after 2020.

The Land and Environment Court has granted the Port of Gothenburg consent to build a new freight terminal beside the existing terminals.

“We are very pleased to receive this decision, which will strengthen Gothenburg as the logistics capital of the Nordic region. The terminal is an important part of our future expansion and will present us with an opportunity to handle the increase in demand for sea transport via the Port of Gothenburg,” said Magnus Kårestedt, Port of Gothenburg chief executive.

The maximum draught for vessels calling at the terminal will be 11 metres. This means that traffic will probably take the form of intra-European freight transport – either as a final destination or to the major transshipment hubs in northern Germany, the Netherlands and Belgium for onward movement to various parts of the world. 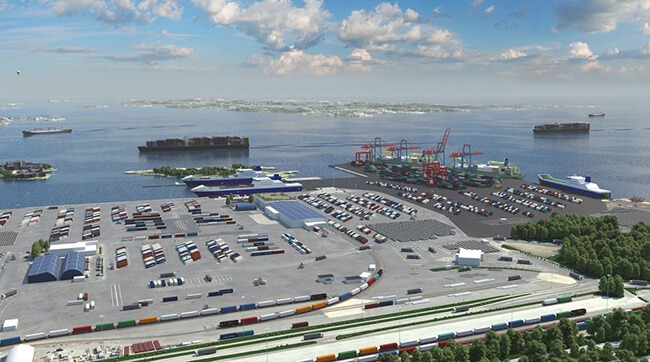 “We have already noted an increase in demand from the market. There is also a political ambition in Europe to switch more and more transport from land to sea in order to alleviate pressure on the roads and mitigate environmental impact,” said Magnus Kårestedt.

It has still not been decided what type of goods the new terminal will handle – containers, rolling goods such as trailers and cars, passenger traffic or a combination of several types of freight.

“The permit will allow us to adapt the design of the terminal to what the market will be like in the future.”

The terminal will be run by an external operator in precisely the same way as the current freight terminals at the Port of Gothenburg.

“Exactly who it will be has not yet been decided although we already know that there is considerable interest in operating a terminal at the largest port in the Nordic region,” Magnus Kårestedt said.

The area will be 220,000 square metres, equivalent to 30 football pitches. The cost of the investment is expected to be in the region of one billion kronor.

The new terminal will be built using dredging spoils from maintenance dredging that is taking place throughout the port area*. The spoils will be deposited in an embanked area in the bay at Arendal and will be made solid by being mixed with cement.

“By using dredging spoils in the construction, we can reuse material that would otherwise be simply sent to landfill,” said Magnus Kårestedt.

Once the new port area has been constructed, eelgrass will disappear from the seabed. Eelgrass is an important part of the marine ecosystem and acts as a nursery for several species of fish.

“As is always the case when we expand, we compensate for our encroachment on nature and we will therefore replant eelgrass that at least matches the eelgrass that disappears from the bay at Arendal,” Magnus Kårestedt explained.

* The Gothenburg Port Authority is responsible for regularly dredging clay and mud from the seabed in the port area in order to maintain the depth stated on the nautical charts.

Where? On the Hisingen side of the river, at the estuary of the Göta Älv, between the Älvsborg Harbour and the Arendal Harbour.

When? Construction will commence in 2017. It is estimated that the terminal will be completed at some point after 2020.

How? The terminal will be built using dredging spoils that will be deposited in an embanked area in the bay at Arendal.

Why? To handle increasing freight volumes in Europe.